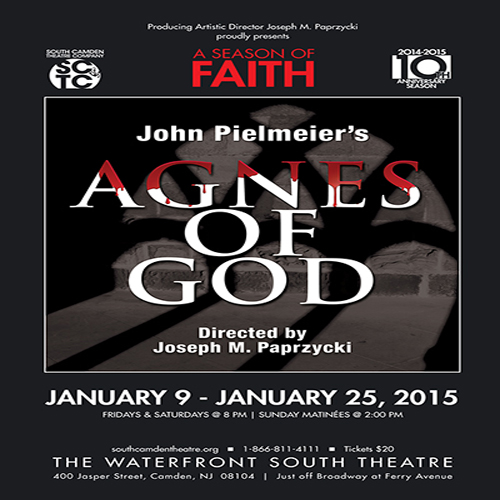 (1888 PressRelease) South Camden Theatre Company, a nonprofit professional theatre company located in Camden, New Jersey continues its 10th season titled “A Season of Faith” with a production of AGNES OF GOD written by John Pielmeier and directed by Joseph M. Paprzycki. Production Opens January 9 and runs Through January 25, 2014 on Fridays and Saturdays at 8p.m. and Sundays at 2p.m.

AGNES OF GOD tells the story of a young novice nun who gives birth and insists the child who is found dead is the result of an immaculate conception. A court-appointed psychiatrist is sent to the convent to evaluate her sanity as the Mother Ruth tries to shield Agnes from the investigation. The question of who killed the infant and who fathered the baby force all three women to re-examine their faith. The play first opened on Broadway in 1982 and won a Tony Award for best featured actress in a play for Amanda Plummer, as Agnes.

Producing Artistic Director Joseph M. Paprzycki states, “AGNES OF GOD by John Pielmieier is a perfect fit for our tenth season, ‘A Season of Faith’ as we bring this moving play of faith and psychology to South Camden Theatre Company. Producing this stunning work is our way of saying thank you to Msgr. Michael Doyle and Sacred Heart parish for allowing us to launch SCTC in their church basement for our first five years.”

All performances will be held Friday and Saturday evenings at 8 p.m. and Sunday afternoons at 2:00 p.m. at the 96-seat Waterfront South Theatre located at 400 Jasper Street in Camden, New Jersey. Tickets are available for purchase for $20 online at http://www.southcamdentheatre.org, by calling 1-866-811-4111 or at the door. For more information about South Camden Theatre Company, please visit www.southcamdentheatre.org. Follow the company on Twitter at ( @ ) SCTC1 and on Facebook at www dot facebook dot com/SouthCamdenTheatreCompany dot