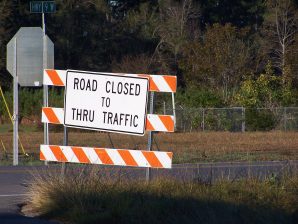 What makes the state believe that flooding of urban areas is not being caused by the filling of wetlands, heightened new roads, and putting more concrete pilings in drainage basin areas?

Before building any more roads, an environmental impact study should include what hindrances there will be to water drainage — when all those waterways are filled with dirt, concrete piers, and steel rebar.

Water from higher ground has to go somewhere and eventually make its way to the Atlantic Ocean or be absorbed. Otherwise it will back up like it did all the way over Route 9 and several other major thoroughfares.

And the chemicals the military continue to spray aren’t helping matters (before and during the storm) because the spray not only fuels the storm’s tenacity but blocks the sun’s rays from drying up the water on the ground — stifling crop and forestry production to absorb water — and makes everyone sick.

Something needs to change, and if the state Department of Health isn’t going to help by protesting air pollution, seismic testing, I-73, and unneeded road construction, then we need a local environmental protection group to form and mandate impact studies before anymore damage to the land, sea, air, and local waterways occurs. This doesn’t even mention the light, electrical, and emf pollution traveling the land. It’s no wonder the turtles and fish find somewhere else to lay eggs and feed – the Strand looks like a meteor shower parked on the beach to ward off predators.

I might add that three roads are still closed within three miles of my house, and that makes me wonder where the money is to fix them. What’s happened to the political process of help?