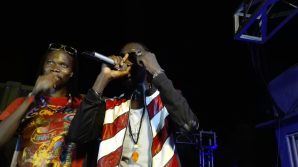 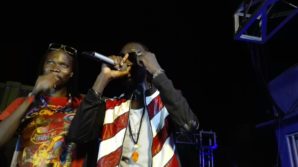 WJ and Silver sings together at the end of the battle.

When skyline international promotions broke the news of a music battle between Silver x and WJ it was the talk of the city it dominated the social media everyone among the youths at least said something about it.

After the battle in the two venues of Vegas and Mask those in attendance including the ones who did not were expectant of the results.

Skyline’s CEO and His organizing team had earlier in put their analysis some of which are similar to mine but I looked far ahead to give much more detailed analysis.

SilverX Real Names Ceaser OkutaMalish is the boss of the Holy land family, he is known for his popular songs. Bamba ta Deng, DuniaKarabu, Wele, and the Fetisusokol hit that broughhime to fame.

Silver started his music in his home area before moving to the capital Juba he has performed in sveral east African towns and cities. Silver is also among the first south Sudanese artist to travel to the diaspora because of music he has recently been to several Australian towns to perform during the festive season.

WJ his name is Wonlok James he is the King of the Lokwilili kingdom and former Freedom boys singer he started his music probably way back in 2002 before the CPA and later formed the Lokwilili Kingdom. He is known for songs such as Lotole, Salama, Ana bi ruwa wen, Lokwilil, Season of peace, and the recent one Kafukele. He is currently the ambassador of Save the children international campaigning for children to go to school.

Looking at the battle allow me take you through and find out who did better that the other in the domains mentioned. This analysis is also to help artist to get familiar what to do not only in battles but also music performances and concerts. If any music  battles have ever been organized here in south Sudan it has never been as heavy as this!

Did not impress the crowd his entry onto the stage with a new song  a riddim produced in Asylum records(Also used in the song ArabiMafii) the song is not mastered and not known to the crowd,

This gave a bad impression as attraction at first sight counts. Attracting the fans right away adds value.

Stage entry requires a song that is your anthem something well known to your fans this is to help drive the fans crazy from the start. Such that the rest will be a work over.

His entry was massive he engaged the crowd from the start this made the crowd to sing with him throughout his performances in both shows.

On day one he failed to control the mic while sampling his song Salama in his first stage appearance at Vegas it made a lot of hissing sound, this might not be his fault perhaps but it was visible that he wasn’t bothered.

Foreign and common Karaoke dancers with same dancing styles they over crowded the stage as they were more than the space making some of them to be watching instead of dancing.

It seem the dancers did not practice with silver as each danced his/her own style. Their strokes sometimes were parallel to the beats of the songs.

He has professional rare dancers well dressed with a LokwililiKindom design it earned him marks as the boys really knew what to do as they danced to the tune of a particular beat. The dancers being south Sudanese also added some marks for WJ. Only that he was not gender sensitive all dancers were male.

In the first appearance of Silver on the stage he showed a visibly scared face he was not in his usual mood. Whether he feared or was stressed only him and God knows.

His stage approach was not of the Silver I knew, he didn’t storm the stage and get cheered by his fans or the crowd as usual. Whether it was history working against him no one knows

As usual Silver does not tune his performance to the meaning of the lyrics and the beats of the song. Sometimes he jumped and bounced forth outside the beats. Something he later improve on the second day at Mask.

In Vegas Silver’s Malakfe song stormed the crowd, there was a poor coordination between silver and his DJ making him sometimes to go off key but every time this happened he covered it up something a real artist is to do.

When he appeared in his branded chair Silver pulled the crowd it drove the fans crazy as his bouncers carried him while on stage. Though he seem not interested in it a reason possibly he did not bring it on day two.

At Mask silver brought Tobbee and YP Thiara to join him on the stage even after singing their collaboMasura. The two artist who broke up with Holy land years ago remained on stage sometimes without concentrating on staging.

In terms of staging WJ nailed it he actually knew what the fans needed, he chanted slogans of peace and love something that clinked the crowd to his music

He was to the beat and meaning of the song, he put relevant emotions as in lyrics of the songs. This is exactly what the crowd needed this was one factor the put WJ far ahead of Silver.

Although his song Lotole did not try to catch the crowd at Vegas he was flexible to push and suit it to the fans, it showed genius in him.

He managed to fit in something, he had some perfect combination in his two appearances of day one. Silver actually got some of his self-designed cloth was superb right from day one to two. Only is other combination of black was a nightmare. I think it was problem of choice in regards to color.

The dress code of Tobee and YP Thiara betrayed the Holy land boss it was not typical of a battle staging. Why did Silver have them? If it was to give him support he missed it was a Piri-piri to the eye.

Here he was off the hook, WJ seemed to have not valued or considered any importance in dressing the Lokwilili Camp were not changing their staging attires per each performance.

WJ appeared twice on stage with the same attire in both shows unlike Silver. Despite that it was not a classical attire he was putting on ordinary wears. Whether he wanted to remain simple or whatever it was out of context that time of a battle.

Some people come to such shows to make friends, nurse trauma, and look for healing and reconciliation prospects they come to kill stress enjoy life and interact with new people irrespective of where they come from. They come looking for hope. How did each artist contribute in building peace?

He did not do much to contribute towards peace and reconciliation, he was self-centered and concentrated in talking about himself. Instead of caressing the fans with healing words he bombarded them with his achievements, plans and self-appraisal something that did not go well with the fans at Vegas, people are interested in knowing something new and unique always people do not want to hear about plans or achievements they are perceived as self-praise beside it is the fans who have brought those achievements making you to plan.

He was genius and mature he knows well what south Sudanese need in regards to Peace, it was in his performance throughout as he threw words of “Peace and Love, one love” etc. he focused in what the fans needed it gave him credit.

Although we don’t know what the organizers when through back stage every person in attendance of the battle was impressed with what happened at Mask as WJ performed Silver’s songs as Silver also did the same. When they joint together and performed their songs it received a loud thumps up and cheering from the crow, all were impressed it show a sign of togetherness a spirit and message of peace love and reconciliation. It signaled that nothing is permanent in the name of peace it came at the right time when…….!!

When they sung Sot Talaga by CJ Oman and Celebrate by Kembe it became time to recognize the legendry version of the music industry in this nations. It also signaled that in the music industry some artist know well which songs are hits and well taken by the fans.

Big up to Skyline and all the system in it nothing has ever happened as such before, it is the biggest and record holding event in the entertainment industry ever held.

It is not easy to bring this two giants together especially that they have been in differences for so long.

Skyline has been existing by name in the entertainment for some time without doing much but this concert has put them up on the chart. It was perfect although there were delays I still think it was due to back stage debate as in battles always the camps disagree on several things.

Next time try to improve security in and around as many people entered either at zero cost or reduced fee. Besides did the security know someone was raped on the first day of the battle???

The Disco Jokers knew their job they tuned and remixed the songs to the tone the fans expected. Although the DJ for Silver was not all that….he was good maybe it was because of being new to the two venues.

You now know who did better than the other I give you the freedom to pass your own verdict.