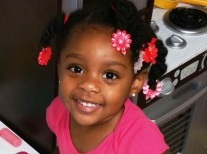 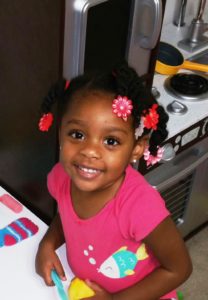 In 2013, LaDonna and Luther Jenkins of Southfield, were joyful at the birth of their beautiful first-born daughter Lauren. Their baby girl was healthy and thriving.

When Lauren was about 17-months-old, however, there were a few signs that caused some concerns.

“Lauren started to have staring spells and it advanced to involuntary twitching. She also collapsed and it looked like she was having a seizure,” says LaDonna.

After taking Lauren to her primary care doctor and a local neurologist, tests revealed that there was a mass on her brain.

“We were terrified. Everything happened so fast and we did not know what to expect,” explains LaDonna.

The local neurologist suggested she be seen at the Children’s Hospital of Michigan. After evaluation from a team of specialists, tests revealed she had a mass on the upper-right side of the brain that was the probable cause of her seizures.

Surgery was recommended and performed by Sandeep Sood M.D., neurologist at the Children’s Hospital of Michigan, in November of 2014.

The surgery was a success and a biopsy revealed the mass was not malignant.

Lauren surprised the doctors and staff at how quickly she recovered.

“She came home from the hospital after only four days and is doing amazing,” LaDonna says.

She adds that other than the incision from the surgery, you would not know that Lauren had such a serious condition. She is a very happy child who loves to play catch and be active.

“This experience reminds us to really pay attention to how your child is doing and if there are any issues you don’t feel are normal, do not hesitate to take your child to a doctor for an evaluation. We are also so thankful to the staff and doctors at the Children’s Hospital of Michigan. They took the time to thoroughly explain what they were doing to treat Lauren and the care was outstanding,” LaDonna says.

For further information on epilepsy and seizure treatment visit http://www.childrensdmc.org/Epilepsy.