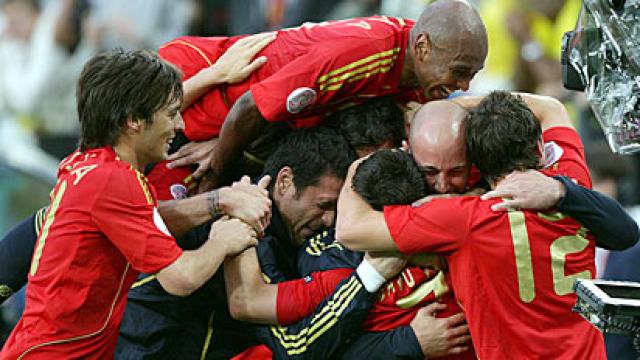 David Villa managed to slip in behind the Swedish back four to one-time a winner quietly past keeper Andreas Isaksson deep into second half injury time – to the horror of Swedish fans at Tivoli Neu Stadium.

Both sides had been level at one goal apiece throughout most of the match – the Spaniards opened the scoring first in the tenth minute when David Senna collected a short corner at the top of the box and chipped it waist-high to find the boot of Fernando Torres. Zlatan Ibrahimovic equalized for the Swedes in the 33rd minute, collecting a lob from Fredrik Stoor on a counter-attacking progression and spinning past his opposite number to power a shot past keeper Iker Casillas.

Spain appealed for what looked like a legitimate penalty in first half stoppage time when Johan Elmander indiscriminately rammed into the back of David Villa ten yards from goal to deny the Valencia striker a promising cross from the right in a Spanish counter-attack. Referee Pieter Vink waved off the flurry of protests, however, and the half ended 1-1.

Villa wreaked havoc in the Swedish penalty box again in the 63rd minute, when Isaksson spilled a shot from David Silva and was then kneed in the chin by Villa in the ensuing scramble for the rebound. Torres attempted to shoot into the wide open net, only to have three defenders deflect his shot for a corner.

Then, three minutes into second half injury time, Villa found the end of a long seventy-yard pass that bounced over four Swedish defenders before reaching the tournament’s high-scorer, who made no mistake with his volley to put his side ahead for the win.

Spain now lead Group D alone with six points, although they are not guaranteed a berth in the quarterfinals until the end of today’s other Group D fixture between Russia and Greece.

Filed under: Sports, World
Share Tweet Pin G Plus Email
previous article: Be Resolved : I will not give up my principle
next article: Pakistan Won Kitply Cup Final by by 25 Runs