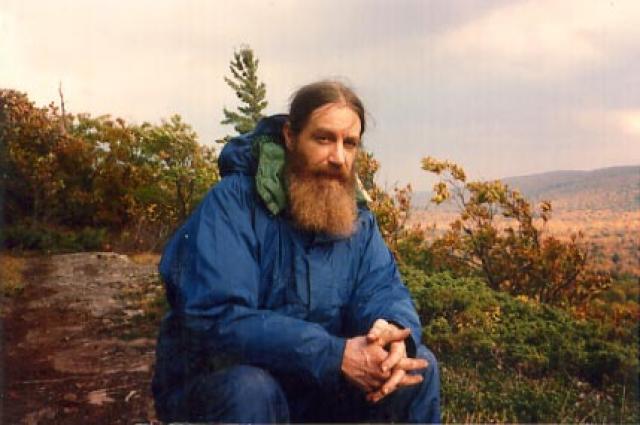 This is what’s known in the trade as a "double," two books that are bound together. Almost always, each is upside down in relation to the other. As far as I know, they are always paperbacks, and they were usually published by Ace. (The best collection I’ve seen in recent years is at Brier Rose Books in Teaneck, New Jersey.) Traditionally, they were science fiction, and occasionally cowboy novels. This is poetry.

Also there is lovely cover art, hand-lettered in black magic marker, with stickers affixed — at least in my edition. On the cover of Sparrow! is one yellow sticker saying "Happy New Year," and another reading:

and proud of it.

On the cover of ANTLER is the alternate sticker:

Both of these circular red decals are from a New York Review of Books direct mailing, which I myself have received. Also on the cover of ANTLER is one panel of an unidentified comic book. Two long-haired guys are speaking. "Rich, I’m like, so glad you’re here. Can you do a reading for me, lover?" asks the first. "oh, bollocks… Tell you what, love — me mate John here is a septic. He’ll do you one for a tenner," replies the second, who is only seen from the rear. (That’s right, the word is "septic.") Both books are xeroxed and hand-stapled, "Published in an extremely limited edition in April, 1997 by KOFF Communications International in conjunction with Instant Editions & Unimproved Editions," according to the copyright page. "Handmade covers by the poets." Edmund Tubb is Edmund Berrigan; Elanor Tubb is Elinor Nauen.

Elinor handed me this book in 1997, with a handwritten note tucked inside:

Hope you have fun

(I wonder if they gave one to Antler?) I forgot about this book — after glancing inside it — until three months ago, when I discovered it in my garage. (I’m endlessly sifting through the contents of my boxes.)

Should I be offended by this? I wondered, reading it. Is Sparrow! about me — a parody of me? And if so, is it a loving parody? Or are these simply two collections of poems using me and Antler — two funny names — as titles? Here is an example, from Sparrow!:

Good friends flow by from upstate

& return to myself, being again;

I don’t want to have to try too hard

to be surrounded by the people

they just appear in the room,

& time is too blotchy

to be linear, ever; the tape wears

through, & you can hear the other side,

though faint. What does one say to

it, in separate instances :

Thank you for being what I’ve been taught,

now go on your way.

it’s a treatment to being alive.

I live upstate. (But I suddenly realize, I didn’t live there in 1997!) Am I the "what I’ve been taught," now being told to go on my way? The diction is simple, like my poems, but the sentiments seem to be Eddie’s. Am I a mask that Eddie is wearing in order to become more himself?

Just for comparison, this is one of my poems:

Tell the County Librarian to Shut up

The Neglect of Cheese in European Literature

is a work of such unprecedented & raucous

detail that it is doubtful

Something tells me these are both great books.

Filed under: Media & Tech
Share Tweet Pin G Plus Email
previous article: What did he gain in his life?
next article: THOUGHTS ON A RAINY DAY