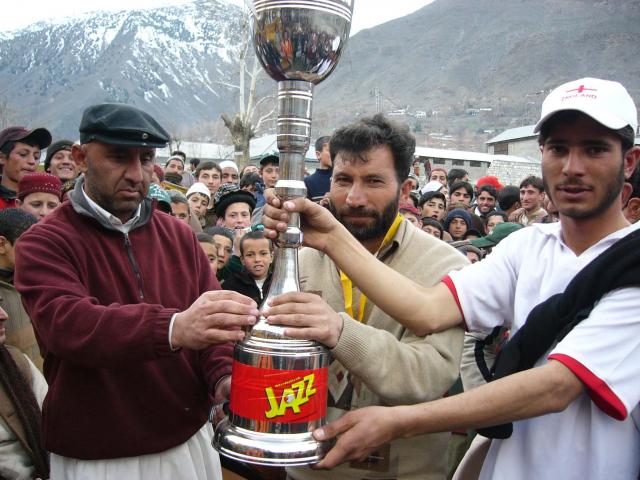 CHITRAL: Second Mughulandeh Cricket Tournament concluded at Polo ground Chitral where NCC Ochusht defeated Lahore Badshah cricket team with 59 runs. According to detail Second Mughulandeh Cricket tournament has been started a month ago where 56 teams participated. The final math was played between NCC Ochusht and Lahore Badshah cricket teams where NCC defeated his rival team with 50 runs and declared the winner team. NCC while playing first had given the target of 85 runs but all players of its rival team where declared out at 40 runs. Asad Ali was declared man of the match while Ahmad Ali was titled as man of the series both the players were from NCC team. Tehsil Nazim Chitral Sartaj Ahmad Khan was chief guest on the occasion. Addressing to the spectators and players he said that the youth must to participate in social and positive activities to avoid from any social evils. He expressed his convern over that there is no play ground publicly for youth of Chitral.  He announced that TMA Chitral will build a football ground on self help basis with cooperation of other stake holders. He also announced for launching tournament of different games like

Tug of War, Cricket and Football at different places of Chitral to engage the young generation in positive activities for a health society. He announced of rupees 3000 for management committee and rupees 1000 for each teams (winner and runner up). At last he awarded runner up cup to Sajjad Ahmad captain of runner up team and winner trophy to Sohrab Ahmad captain of winner team.

As well as 3 persons who were coming from Gilgit to Yarkhun Lasht Chitral by feet over snow bound road were feared to be disable by snow bite. According to detail Tama Jan son of Pook Lali, Woor Gulab son of Murad Ali and Khurshid son of Mailas Khan residents of Yarkhun Lasht who are working at Gilgit . They were coming for condolence of their 4 relatives who were died under avalanches at Yarkhun Lasht. As the main road between Gilgit Chitral have been blocked due to heavy snowfall. They were coming by feet over snowbound way. When they traveled more than 48 hours they became unconscious and were rushed to near by hospital at Booni. The hospital source said that if they were not recovered their legs would be chop if not recovered with normal treatment  as badly affected by snow bite.

A meeting of land settlement department staff especially patwari (land steward, land record keeper) was held here at a local hotel participated by all Patwaris working at Chitral distict. They discussed their problems and decided to frame their union for solving of their problems which was accepted by all members. They approved unanimously heir union as Chitral patwari and Qadir Aman was elected as president o f the union. Amjad Farid was elected General Secretary, Shabir Ahmad vice president Drosh, Abdul Ghafoor vice president Booni, Murtaza Ali vice president Chitral, Qazi Ihsanullah as finance secretary Zafarullah was elected as  Deputy General Secretary. At last the newly elected president of Patwar union demanded for regularizing services of land settlement department as they working on Adhoks basis.