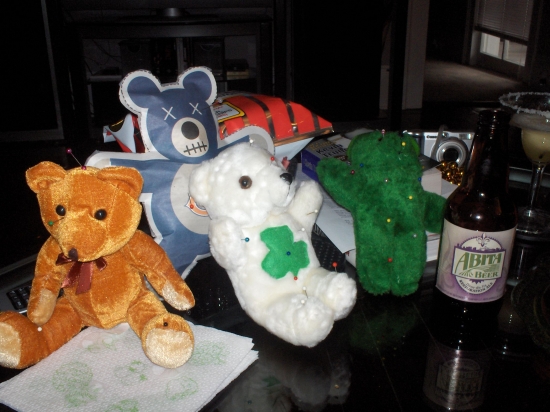 The Saints didn’t make it to the SuperBowl again this year.  New Orleanians are used to disappointment, and sadly, we’ve also gotten used to living among the destruction wrought by Hurricane Katrina and the flood.  While we look forward to Mardi Gras, we can’t help but wonder if Chicago fans will again engage in riotous behavior if they win the big one.  I’m referring to that celebratory disaster after the Bulls won the championship back in the 1990’s and wonder what urban dynamics create such a force.  For New Orleanians, a community of diverse people who know the meaning of the word joy and revelry, the idea of purposeful destruction in response to winning is just plain bizarre.  But I suppose there are many out there thinking our desire to live here is just plain bizarre.

During the past several months, the Saints became America‘s team.  It’s hard to explain in a few paragraphs how we have time (and money) for fun while living in the chaos of a disaster zone.  Perhaps the chaos of our world famous celebrations prepared us well.  Perhaps our priorities are different.  Perhaps we are different.

Everyone knows what happened on August 29, 2005; we were struck by a Hurricane named Katrina.  It was the day after that sealed our fate, determined our legacy.  It was the end of the world as we knew it and no, we did not feel fine.  The Army Corps of Engineers flood protection system gave way and filled our city with water and tears.  We fell to our knees praying for those who stayed behind by choice and by necessity.  Before the rescue and chance to address basic human needs, the nation started to debate if New Orleans was worth rebuilding.  I was in Chicago and the callousness and coldness exhibited by the citizens made no fan of me.  Does a natural disaster followed by the greatest engineering failure in modern history preclude the right to exist as a place or as a people?  And so the people of New Orleans began our battle for New Orleans while our beloved Saints played home games elsewhere.

Since the disaster, we’ve struggled to find normalcy.  The citizens have volunteered thousands hundreds of hours to clean up the public spaces, gut homes for those who can’t do it themselves, and provide public voice to the umpteen planning processes that never seem to be good enough for the feds.  In the meantime, those in the great elsewhere wonder why we haven’t progressed more.  Fact is: you simply can’t understand the vastness and massiveness of it until you visit.  Even I, an urban planner, was unprepared and still have days where I just cry because it is still unfathomable.  So much human need; so much….   When are we permitted to start having fun without being judged because there is still so much to do?  We stopped caring what the rest of the world thought a long time ago…we have the right to exist and we have the right to live life with passion.

Mardi Gras 2006 was our homecoming; our way of letting the world know that we are still here and that in spite of our tears and the barrage of insults, we still know how to have a good time.  People said “Mardi Gras is irresponsible” – so is a lot of stuff, but people still do it.  For those who think Mardi Gras is just a bunch of drunk tourists on Bourbon Street showing flesh for cheap baubles, I issue a personal invitation to come visit.  Mardi Gras is a citywide party produced by private clubs but sanctioned by the city.  There are balls, concerts, spectacular parades, and thousands of local denizens who don costumes and hit the streets to revel with thousands of other people having fun.  Even if Mardi Gras had been cancelled, it would’ve happened.  We would’ve still donned our costumes, and we would’ve made our own parades.  It’s like that here.  We love our city and we love the people of our community…all of them (except the criminals but that’s another article).  Mardi Gras 2006 gave us a hard earned day off from recovery work, an escape from our new reality.  It gave us reason to pause and rejoice in how far we had come, to celebrate our being.

A few months later people started saying “rebuilding the Dome is irresponsible.  That money could be used for more important things.”  Perhaps a new Dome would’ve been wiser since professional sports are big players in the economic landscape of competitive cities.  The critics never considered that the Dome also hosts conventions and concerts and that the Saints football team is an economic engine for the metropolitan area.  Surprisingly, not even the supporters expected the homecoming of the Saints to be the best mental health investment for the Gulf Coast region: an area very much in need of mental health services.  Regardless of the progress, the pride, and the ability to still have a good time, it’s a hard place to be most days.

On September 25, 2006, the Dome reopened.  Our Saints came marching home and New Orleanians far and wide were in that number.  The place that had come to symbolize human suffering during past football seasons (and the aftermath of Katrina) transformed itself.  The Dome became a place where the citizens of New Orleans were united in diversity and more committed than ever to our future.  We showed the world that we are home and that we are a force to be reckoned with…suddenly, we had a lot more friends.

So go ahead Chicago, cause destruction when your Bears win.  We’ve got neighborhoods to rebuild, great food to eat, and Carnival and Jazz Fest preparations to do.  Life among the ruins might be hard, but it’s safe to say that there is no one down here who would’ve made it worse if our beloved Saints had marched all the way to Miami.  Thank you Saints for lifting us and thank you America for your support.  We aren’t finished yet…we still have our homegrown Peyton Manning to cheer.

Filed under: US
Share Tweet Pin G Plus Email
previous article: Armageddon and You
next article: VS Ramachandran – A Reductionist?