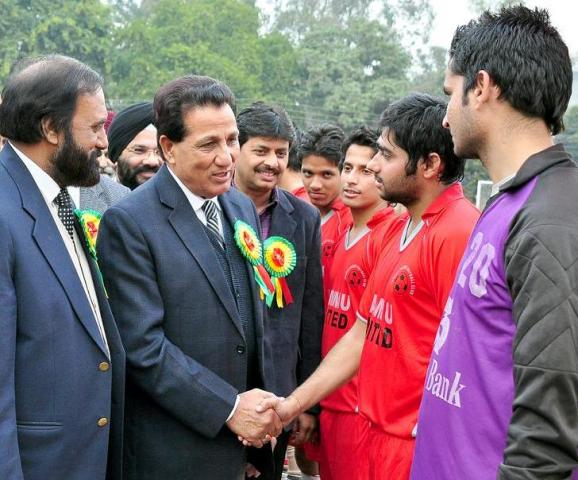 Speaking on the occasion, the Minister said that selection of a boy from J&K State at an international event at Qatar has made the entire State particularly the sports fraternity proud and his selection has proved that the State possess precious sports human potential and it is required to be explored by organizing these events. He said football is the most popular game of the State and felicitated the organizers for starting the New Year with a gold cup football tournament.

While acknowledging  the poor standard of sports in the State,  R s Chib said that Government was endeavouring to strengthen sports infrastructure in the State and ensuring sports development becomes an integral aspect of youth development with special emphasis on ‘Broadbasing of sports’ in the State.

The Minister said that a proposal to provide universal access to sports in rural areas and to strengthen nationwide rural sports infrastructure has been chalked out, christened as Panchyat Yuva Khel Abhiyan. The objective is to provide basic sports infrastructure and equipment at the panchayat level and encourage sports and games in rural areas at panchayat, block and district level.

Chib said that after the successful organization of the common wealth games, the overall sports climate in the country has improved, adding that by promoting sports at grass-root level, the seed bed of sporting talent will widen, leading to better performance by our sportsmen in the national and international events.

While appreciating the role of organizers and various associations, the Minister said that by organizing such events, they are playing a positive role in the development of sports culture in the State. The Minister congratulated  S.M. Gill for organizing the football event.