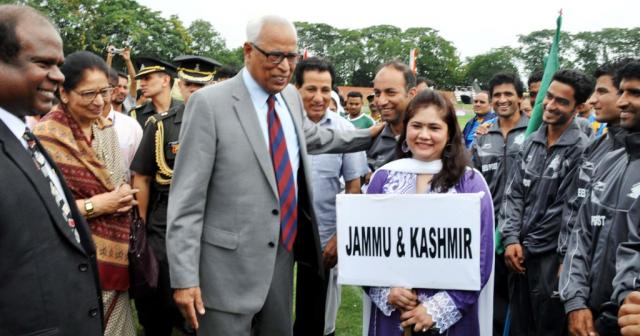 9 teams from Uttar Pradesh, , , Karnataka, Tamil Nadu, West Bengal, Orissa, Haryana and are participating in this Tournament organised by the .

Mrs. Usha Vohra, First Lady, and  R. S. Chib, Minister for Youth Services and Sports, were prominent among those present on the occasion.

Speaking on the occasion, the Governor observed that sports promote close understandings and camaraderie among youth of various parts of the country. Recalling that Jammu and Kashmir had passed through a difficult phase during the past years, he expressed happiness that the environment had started looking up and this year has been a very good year for the State with a large number of tourists visiting J&K.

The Governor complimented  John Samuel, Chief Post Master General, J&K Circle, for taking notable initiatives not only for reviving the past glory of the postal services but also for the promotion of sports, which have contributed to re-invigorating contacts and interactions among youth from different parts of the country.

The players of all the teams were introduced to the Governor. He declared the Tournament open and wished all the participating teams a good game.

The Lady Governor released “My Stamp” brought out by the Department of Posts on this occasion.

R S Chib, Minister for Youth Services and Sports, speaking on the occasion, gave details of the various initiatives being taken for the promotion of sports and games in the State. He said that earlier Mohammedan Sporting Club, Kolkata, had played matches in and now the famous Mohan Bagan team will be playing one match each at and in the beginning of next month.

Later, the Governor, Lady Governor and  Chib were presented mementos by  Samuel.

Giving details,  John Samuel, Chief Post Master General, J&K Circle, thanked the Governor for taking keen interest in the promotion of postal services in the State and recalled that he had launched “I Love My Post Office” campaign in the State which has proved a great success. He also gave details of various other sports events being organised by his department in the State in the coming months.

In his welcome address,  Amit Sharma, Director, Finance, J&K Circle, gave details of the teams and the matches being played during this 5-day sports event.

A brief cultural programme was presented by the school students on this occasion.