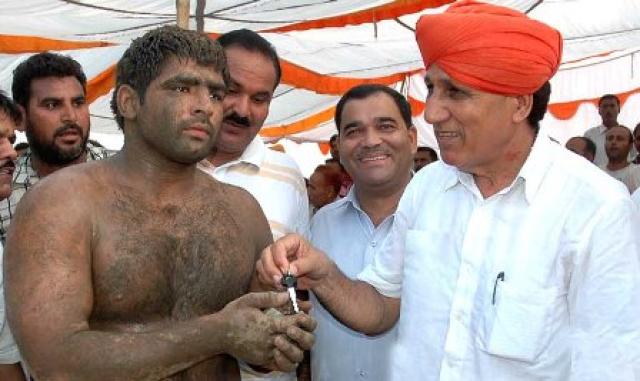 , September 12, (Vijay Kumar) –  The Minister for Sports, Medical and Higher Education,  R S Chib said that sports promote the taste of the youth towards sports and games which in turn promotes brotherhood and communal harmony. He also announced a stadium at village Satrian will be constructed shortly to provide platform to the sports lovers to carry on their activities throughout the year.

As many as 100 bouts were fought and the main bout was fought between Kamaljit Singh from and Golu Pahalwan from Chandigrah who was declared as runner up and was awarded Rs.15, 000/- by the Minister.

Earlier, Chib paid obeisance at the dargah of the Baba Peer Monga and prayed for the welfare of the people of the state.

It is worth mentioning here that the tournament is being organized by the Chibhal Biradari in memory of Peer Monga Nath at Tohana Tibba, R. S. Pura every year. Peer Monga Nath belong to Deva-Watala (now is PoK) tehsil Bhimber, district Mirpur and he was a saintly figure revered by both the Hindus and Muslims. He was a symbol of secularism among all the religions and sections of the society in that area.

Earlier, before 1947 this Tournament used to be held at Watala (now in PoK) in which the wrestlers from undivided and Jammu & Kashmir used to participate.

This is a classic example of rural sports festival which is being celebrated and enjoyed by the thousands of people and at least 50,000 people participate every year.

The expenditure on this tournament is borne by the Chibhal Biradari since they have got lot of faith in the policies of Peer Monga Nath. A large number of people come forward and they donate money, clothes, utensils and other things on the name of Peer Monga Nath.