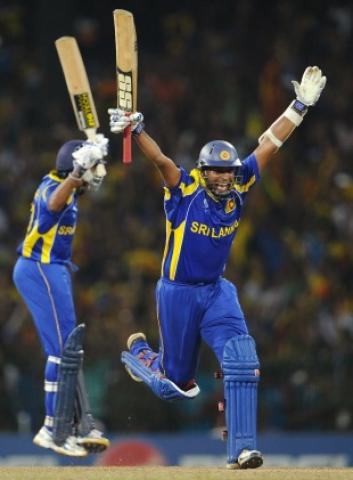 Sri Lanka has today qualified for the ICC World Cup Cricket Finals scheduled to be play  in Mumbai ,India on this Saturday(02nd of April) with a cruising 5 wicket win over New Zealenders at the first Semi Final of the World Cup worked out at the R.Premadasa International Cricket Stadium in Colombo this evening in front of a large home crowd.

New Zealand won the toss and batted first in a perfect batting pitch but failed to live up  their expectations to get a big score as Sri Lankan Bowlers restricted them to 217 runs off 48.5 overs.All Rounder Scott Styris was the highest run getter in the New Zealend innings  as he scored well compiled 57 runs from 76 balls.Martin Guptill made 39 runs off 65 balls.For Sri Lanka Off Spinner Ajantha Mendis and Seemer Lasith Malinga took 3 wickets each while Veteran Off Spinner Mutththaia Muralideran who made his final one day international appearance in Sri Lanka took 2 wickets.

When Sri Lankan openers Thilakaratne Dilshan and Upul Thranaga chasing a target  of 218 runs  for victory  everyone expected them to repeat their powerful batting display against England two days back.However they were only able to put up 40 runs for the first wicket  before Upul Tharanga was out for 30 runs.Thilakaratne Dilshan scored well compiled 73 runs and skipper Kumar Sangakkara scored 54 runs.When Sri Lanka is at 160 runs for the loss of one wicket three wickets fell within space of 9 runs.However the Middle order Batsmen Angelo Mathews and Thilan Samaraweera guided Sri Lanka to a 5 wicket win with 13 balls to spare.Skipper Sangakkara was adjudged as Man of the Match.

After the match Muralideran who is scheduled to retired from one day internationals after this world cup waved to the home crowd say farewell to Sri Lankan supporters  who supported him throughout his career.

This was Sri Lanka’s third World Cup Final entry and two in a row and out of the previous two finals  able to win the World Cup in 1996 under the captaincy of Arjuna Ranathunge.In last world cup final worked out in Caribbean in 2007 Sri Lanka was beaten by Australia.The other finalist with whom Sri Lanka will clash in the Grand Final scheduled at Mumbai on Saturday will be decided in tomorrows Semi Final battle between India and Pakistan.