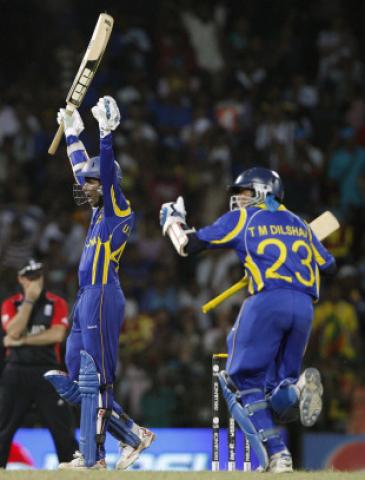 Sri Lanka recorded a superb 10 wicket win over England in their Quarter Final ICC World Cup Day Night Match played at  R.Premadasa International Cricket Stadium in Colombo today and qualified for the semi finals to be played in the same venue against New Zealand on next Tuesday(29th).Both the Sri Lankan Openers T.M Dilshan and Upul Tharanga made an unbroken  opening partnership of 231 runs and reached the winning target easily with 63 balls to spare and with 10 wickets in hand.

T.M Dilshan Scored 108 runs off 115 balls with Ten  fours  and Two sixes and Upul Tharanga has scored well made 102 runs not out with Twelve  fours and one six .Earlier in the day the England Captain Andrew Strauss has won the toss and decided to bat first in the wicket which believed to be favorable for spinners during the night session.However Sri Lankan seemers and spinners were able to restrict the  English batting line up to a modest total of 229 runs  for the loss of 6 wickets with Jonathan Trott scored an unbeaten 86 runs off 115 balls for the England..

Sri Lanka’s veteran Spinner Mutththaia Muralideran got 2 wickets while spinners Mendis Dilshan,and seemers Mathews and Lasith Malinga got one wicket each.This Match was the 100th One Day International Played in the R.Premadasa Cricket Stadium.T.M Dilshan was adjudged as  Man Of The Match .