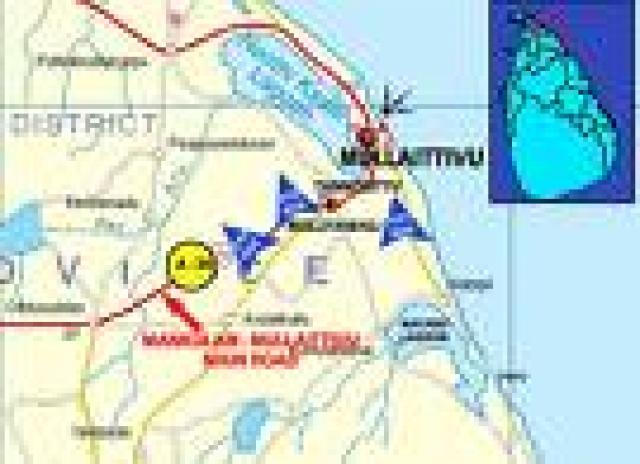 The Sri Lankan Army has launched the world’s largest humanatarian hostage rescue operation in the northern truce zone,  and are now heading further to rescue trapped civilians there  under LTTE control.

Over One Thousand Trapped Civilians return to the side of the Forces this morning from Pudumathalan Area where the No War Zone located after Army requested them to do so through the Loud Speekers.

Five LTTE Rebels who tried to attack forces were killed during the operation this morning Army Sources said.Troops have identified the Best Safe accesible routes for Civilans to escape from No War Zone and already established the Rescue Points on these routes according to the sources.

Defense Ministry said some of these Rescue Points are located just 150 meters short of the Earth Bund Built by the LTTE on No War Zone Border to prevent Civilians by escaping from there."Troops continuousley informed the Civilians about the Safe Routes to escape to the cleared areas and open more such Routes for the Civilians by removing the Terrorist Blockades" Defense Ministry stressed.

Meanwhile Defence Officials said this is  the World’s First Such  Humanatarian Hostage Rescue Operation launched by a Security Force against a Guerilla Organization.Rescuing the trapped Civilians and Liberating the area from the LTTE is the aim of this Operation.

According to the Security Sources 58th Division of the Army now moving  ahead within the No War Zone in the Puthukkuduyirippu Area where the remaining LTTE Cadres including their leaders are occupying. It has been reported around 300,000 Civilians trapped inside the 20 Square Meter No War Zone due to the LTTE using them as Human Shields.

Army already opened Few Gates around the No War Zone,Fixed Loud Speekers on these Gates and requesting trapped Civilians to escape from there.

Sri Lankan Forces captured the entire Puthukkuduyirippu Area the final Strong Hold of the LTTE on last sunday  restricting the Rebels to the No War Zone.