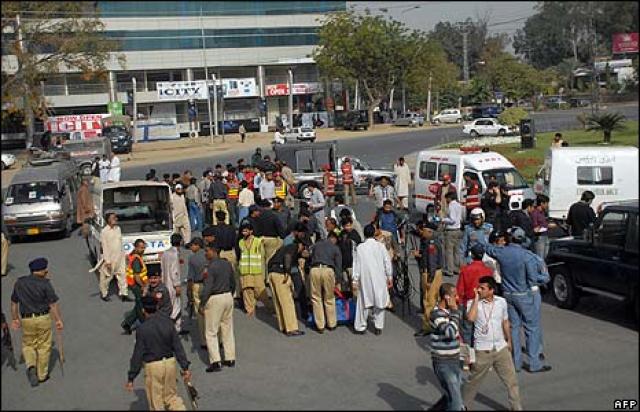 The Sri Lankan cricket team was touring Pakistan and on their second game, when unknown assailants opened fire on their bus as they left Gaddafi Stadium today.

Four Sri Lankan players were injured and five security personnel killed in the assault. All were transported to the hospitals according to media.

The former ISI chief Hamid Gul said that the Indian agency RAW could be behind the attacks because according to, India Times, India was not happy with the Sri Lankan tour of Pakistan, he also added that the Indian government soon after the Mumbai attacks had threatened Pakistan to take the revenge.

The terrorists came from three directions and attacked the convoy of the Sri Lankan cricket team near the stadium.

The attack took place in Gulberg, Lahore’s posh and commercial area and the Sri Lankan cricket team was en route for the Gaddafi stadium.

The CCPO Haji Habib-ur-Rehman said that it was a planned attack and the terrorists look very well trained when we look at the footages of the incident.

Moreover, the Lahore police have started the search operation in different parts of Lahore.

Pakistan Cricket Board, PCB, has cancelled the Sri Lankan tour of Pakistan officially, according to media.

The governor Punjab, Salman Taseer termed the attacks similar to Mumbai attacks and said that it could be the episode of Mumbai attacks, the game that is to defame Pakistan.

A foreign hand is very visible in the attacks and it is the attempt to defame and destabilize Pakistan, some politicians opined on the attacks.

Pakistani President, Prime Minster condemned the attacks and termed it an act of cowardice.

Two Pakistan army helicopters have arrived at Gaddafi stadium to shift the Sri Lankan cricket team to Lahore airport to send them back to Sri Lanka.

An analyst Ikram Sehgal said that the India agency, RAW, could be behind the attacks on the Sri Lankan team, he was speaking to a media channel.

The injured Sri Lankan cricket player, Samaraveera, is not in the condition to travel so the chartered flight has been delayed till 8:30 PM because the doctors are not allowing him to travel.

The pressure is mounting on Pakistani establishment from the masses and the politicians that the time has come for Pakistan to raise the issue in UN Security Council, there is enough evidence of India’s involvement and support to the Taliban and the insurgents groups in the tribal areas, Swat valley and Baluchistan.