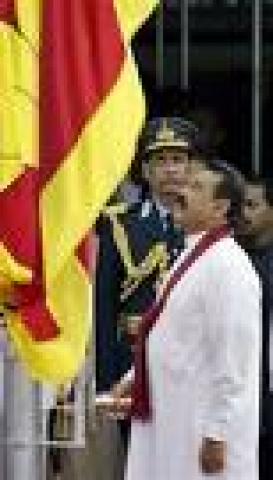 Sri Lankan President Mahinda Rajapaksha today Officially Announced the Ending OF the 25 year old War against LTTE and declarestomorrow as a National Holiday for all sectors in the Country as a Tribute to War Heroes of the Nation.

In his Address to the Nation from the National Parliament this Morning President said Finding a solution to the North East Conflict could be reach with the Assistance of All Political Parties in Sri Lanka and International Help not needed for this Process.He brushed away the Ethnic Differnces by saying that there are no Minorities in the Country except the two National Identities namely Patriots and Non Patriots.

"Military Solution is not the Final Solution for the Problem.Tamil People never believed or favored taking up Arms" President further stressed.

President Addressed  the Nation after Inaugurating 4th Session of the 06th Parliment.