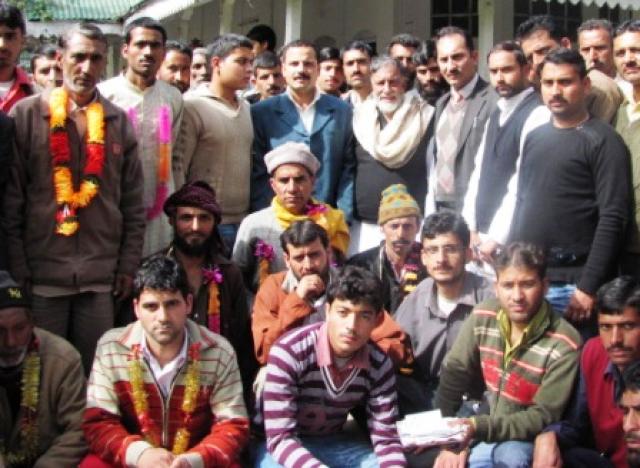 ,March 14,(Scoop News) :- Porf bhim Singh chairman of JKNPP called on their workers to start literacy movement in J&K so that their shall be no one to sign in thumb by 2011. This is real Samul Kranti which shall replace darkness by light and injustice by justice.

Bhim Singh was addressing  in one day district convention held in the Historic town of Reasi by JKNPP today.He said that agenda of Panther Party 2010- 1011 is as bright as light: Resolution of LOC with right of Choice to the residence of POK and Gilgit. This shall end Indo tension forever, Re-organisation of J&K so that Ladhak, Kashmir and may get equal share in power, development and recruitment and rehabilitation and resettlement of all the migrant from POK, Kashmir and with full security and dignity.

The convention was attentdent by Balwant singh,MLA, State President Bansi Lal sharma , advisor to JKNPP and others Panthers Leaders. The Convention was presided over by Balwan singh Disst. President.

Bansi lal advisor JKNPP called on the people of province in particular to support the pathers Party which , he said, is the only fear less voice of the people of the . He said that defeat of Union Home Minister in Pre-paid Mobile phone case in the supreme court has created a History for which credit goes to Prof. Bhim Singh.

In resolution the PP called on the Union Government to full fill the power Requirement of J&K from Salal Hydel Project which is the right of the people of the state.