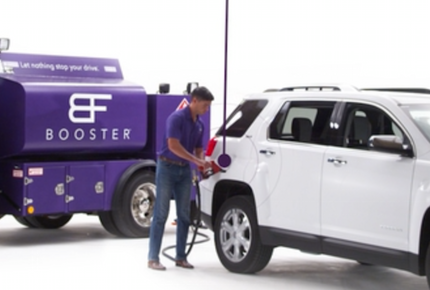 There are many indicators and trends in the auto industry that suggest conventional vehicles are headed for oblivion, which will have a huge effect on the oil industry, as well. But for now, electric drive technology, as well as autonomous vehicles, are far from mass adoption, so gasoline-powered vehicles have a long way to go before going extinct.

With this in mind, it’s obvious that demand for services and products catering to the needs of conventional-car owners will not diminish anytime soon. That’s what a new U.S. startup is looking to take advantage of, offering services aiming to make the lives of those who drive gasoline-powered cars much easier.

Taking Gas Stations Out of the Equation

The Seattle-based startup called Booster Fuels recently started offering on-demand car fueling services, allowing drivers to get their vehicles filled up without having to go to a gas station. In what many observers are already calling “Uber for gas”, Booster Fuels’ business model is based on a smartphone app that allows users to request a fillup on their phone and avoid the hassle involved in driving to a gas pump and filling up on their own.

Users of Booster Fuels app can just park their cars at a lot after arriving at work, order a fillup, leave the car’s gas cap open, and go on with their work day. A Booster Fuels tank locates the user’s car via GPS, arrives at the location within an hour, fills the car up, and the tank driver closes the fueling door in the end.

Then, the user receives a notification on their app, informing them that their tank has been filled and letting them know what the service cost them.

In addition to saving drivers a lot of time by eliminating the need to drive to a gas station each time they need to fill up their tanks, Booster App helps car owners save money, as well.

The company says that its services are cheaper than those offered by gas stations, because it buys its fuel in bulk, allowing for more competitive fares. Booster Fuels offers both premium unleaded and regular. On top of that, the company assures that all their drivers have a valid commercial driver’s license and undergo background checks before being hired, in order to reduce the risk for incidents similar to those involving Uber drivers.

Booster Fuels recently raised $9 million in one funding round. The young company will use those funds to expand operations to California, or more specifically – Silicon Valley – along with certain areas in Texas.

At the moment, the company only provides services at large office parks, with a high number of commuters that have the need to get their cars filled up, but would rather have the gas come to them, instead of wasting time and drive to a pump.

With such an innovative idea, and by targeting an obvious market gap, Booster Fuels has a great chance of making it big in this increasingly popular on-demand economy. What’s more, just like Uber, its business model is pretty disruptive, and threatens the existence of gas stations, so it remains to be seen how traditional gas delivery companies will react to Booster Fuels’ rise.