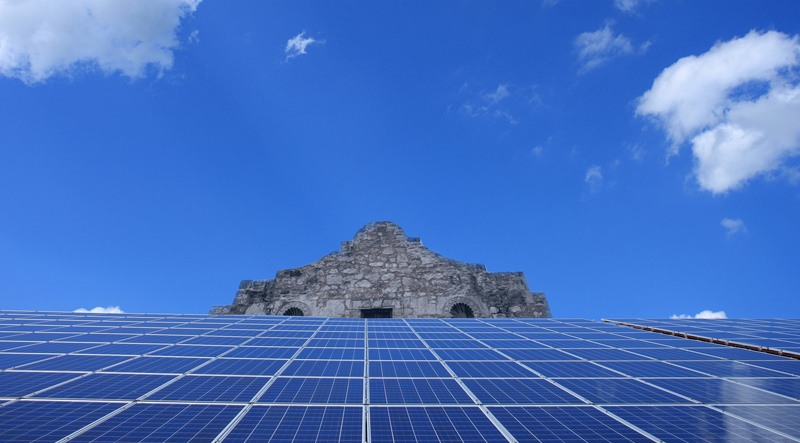 San Antonio is a national leader in solar energy. The industry provides jobs in Bexar County, saves money for local families, and eases our environmental impact. But we’re in a brave new world where coal emissions are pro-environment, and clean tech executives face court for insider dealing. What does this mean for the future of San Antonio’s clean energy?

Will San Antonio Stand Up to the Environmental Regression Agency?

Last week President Trump signed an executive order to cut Barack Obama’s clean power plan. Carbon emissions advocate Scott Pruitt, who now heads the EPA, announced the cut. He said with a straight face that it would be a “pro-growth and pro-environment approach.”

Pruitt had already fought to halt Obama’s plan in Oklahoma. He served there as state Attorney General when the plan launched in 2015. Currently he is under investigation by the Oklahoma Bar Association for an ethics complaint filed by the Center for Biological Diversity.

“We can be both pro-jobs and pro-environment,” Pruitt said. He is apparently unaware of the fact that in the year following Obama’s clean power plan, the solar industry in Texas created 2,366 jobs. This increase raised Bexar County alone to a total of 1,665 solar workers–many of whom are women, Latinx, and veterans.

Luckily, San Antonians do not seem to be buying Pruitt’s disinformation. As one of the most solar energized counties in the nation’s 3rd ranking solar state, Bexar County shows no sign of scaling back its sustainable power. Last year, CPS Energy increased consumer incentives for its “roofless solar” program. These helped apartment dwellers reap the benefits of the public solar farm off of Highway 87 in Adkins.

All along the Pacific coast, meanwhile, governors and mayors have united to support the Clean Power Plan. In response to Mr. Trump’s executive order, they signed a joint statement saying:

“As the governors of Washington, Oregon and California and the mayors of Seattle, Portland, San Francisco, Oakland and Los Angeles, we speak today in support of the Clean Power Plan. We speak in unified opposition to the idea of any decision by the President to limit our region’s economic opportunities or our commitment to doing what’s right to make our cities and states cleaner and healthier for future generations.”

The statement ends with a call to action directed at the nation’s state and local leaders.

“Our cities and states will continue to assert our leadership and position our region for economic success. We urge states, cities and businesses from across the country to join us in leading and re-affirming our commitment to cut carbon emissions and reverse the damaging impacts to our communities of unfettered pollution.”

Perhaps Governor Abbott and Mayor Taylor will soon follow suit in standing up against Pruitt and the Trump administration’s destructive regression.

Meanwhile, not all is clear on the Southwestern front. In 2013, Japanese megacorp Toshiba bought San Antonio’s clean energy tech developer Consert Inc. Consert moved to San Antonio from Raleigh, North Carolina two years earlier. In the wake of the Toshiba buyout, Consert is now facing a lawsuit by its own founder, Joseph Forbes. Forbes and other former shareholders allege that the buyout steered millions of dollars away from shareholders and into the laps of board members and executives.

In addition to the buyout allegedly swindling plaintiffs of compensation, the lawsuit claims that Consert engaged in usurious insider loans. Plaintiffs say the executives loaned the company $8 million in January of 2013, which was repaid during the buyout to the tune of $14 million.

The contract with Toshiba did entitle shareholders to settlements from a pending legal battle between Itron Inc. and Consert. It also called for the creation of a fund to allow shareholders to potentially gain tens of millions of dollars in payouts after the takeover.

However, neither of these materialized. Plaintiffs say Consert and Toshiba dodged these payouts, which were contingent upon Toshiba contracting $100 million in deals with CPS Energy after the merger. Toshiba did, through its subsidiary Landis+Gyr, contract such deals with CPS. But the lawsuit claims they deliberately kept contracts below $100 million. That way they could avoid paying their shareholders.

One former Consert shareholder, Mark Feidler, has filed a separate lawsuit against CPS Energy. It claims that the Toshiba-CPS contracts were in fact worth $128 million, which would put Toshiba in violation of the payout agreement.

Consert, whose headquarters are on Jones Maltsberger Road, employs about 78 San Antonians.

If this all sounds a bit dizzying, you don’t need hire a legal translator just yet. The bottom line is that in addition to facing political threats from the outside, San Antonio’s clean energy industry is fielding economic hazards from the inside.

Though San Antonio’s clean energy sector saw growth this past year, it has slowed since the year previous. Last year Mission Solar laid off of 87 workers, citing “market pressure” as the cause. A report just released by Environment Texas Research & Policy Center says San Antonio has dropped two places in per capita ranking for solar energy use since 2015.

Even so, the report consistently lists San Antonio as a national leader in solar power. It ranks 8th in the nation’s top solar cities by total installed solar PV capacity, and number 1 in the state, as of the end of 2016.

If San Antonio shores up its commitment to clean energy, despite the political and economic mires that it’s now facing, it can continue to see growth, prosperity and progress in this vital industry.