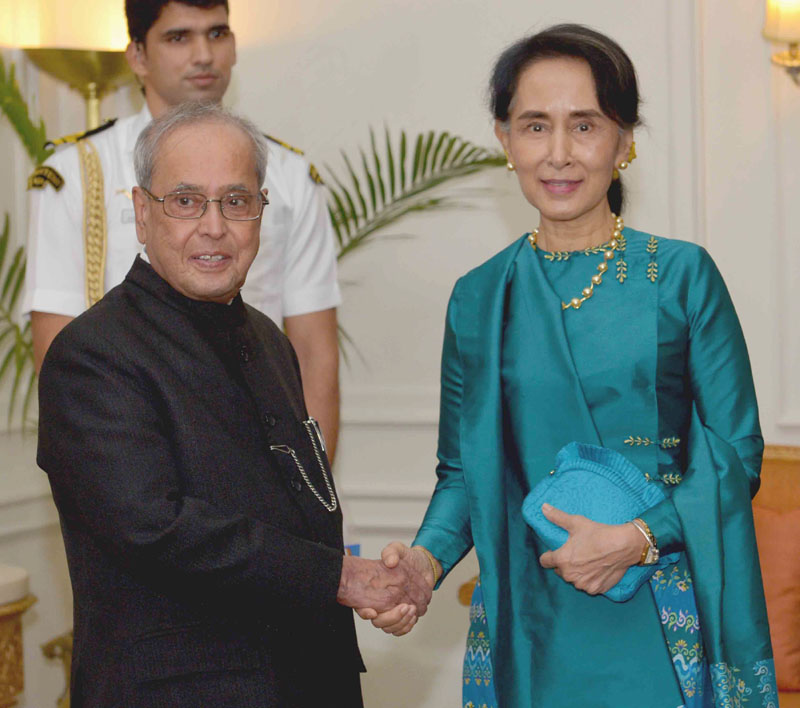 ‘Myanmar Seeks The Cooperation And Support Of India’

Welcoming Ms. Aung San Suu Kyi on her first State Visit to India, the President said that India and Myanmar are close neighbours and have a good long standing relationship with each other. During the visit of the President of Myanmar in August this year, fruitful discussions were held and four important agreements were signed between the two countries.

He said that he was happy that the process of democratization was being strengthened in Myanmar. India will extend all help to Myanmar in this phase of transition in order to set up democratic institutions for ensuring stability in the country. He wished Myanmar all success in establishing a strong democracy. He stated that Myanmar’s transition to full democracy will take time to achieve and India stands by Myanmar in this process.

The President said that India will soon commence work on restoring two old temples and inscriptions of King Mindon and Bay Gyi Daw in Bodh Gaya as requested by the Government of Myanmar. He said that this task will be undertaken by the Archeological Survey of India with financial support from Government of India.

HE Daw Aung San Suu Kyi reciprocated the President’s sentiments and said that India and Myanmar have much in common. She stated that change does not happen easily and Myanmar has to go about the process of transition in a cautious manner. Myanmar seeks the cooperation and support of India as its people look forward to progress and change for the betterment of their lives.