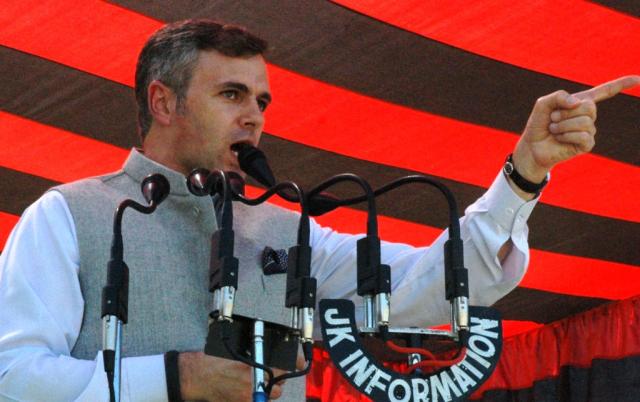 Mendhar(Jammu), April 17 (Scoop News) –Chief Minister, Omar Abdullah Wednesday said that more than 70000 vacancies in government departments would be filled up on fast track through a mechanism of holding interviews at district level by the recruiting agencies so that job-seekers from rural and far-off areas have not to travel longer distances.

“I have directed for introduction of this mechanism as early as possible so that vacant posts are filled up by the eligible candidates”, he said and added that creation of jobs for youth in government and private sectors is the focal point in employment policy of his government.

Addressing a mammoth public gathering at Mendhar in Poonch district of Jammu division today, the Chief Minister said that he would take up the issue of the organizing recruitment rallies by various central government agencies including Indian Railways for the youth of far-flung areas to expand job market for them.

The Chief Minister said that the execution agencies of various power and road projects have also been given directions to give top priority to the employment of local youth in these projects. He said State Government envisages launch of various micro and small hydro projects in feasible areas on small rivers, brooks and streams in the remote areas  in which locals would be provided jobs.

Highlighting merits of unity and reminding people of the sacrifices made by National Conference to strengthen communal harmony, solidarity and unison between various sections of the society in the State, Chief Minister, Omar Abdullah said that dividing people in the name of region or religion can be the handwork of ‘pen and ink pot’ (symbol of PDP) or ‘kamal’ (symbol of BJP), but the bearers of ‘red flag with plough’ (NC Flag) has always worked to unite the communities and harmonize Jammu and Kashmir.

“The slogan of Hindu, Muslim Sikh Itihad Zindabad practiced and nurtured by Sheikh Mohammad Abdullah has remained the governing principal of NC’s political policy”, he said and vowed his party’s determination to further strengthen this characteristic.

Advising Gujjar and Bakerwals to live in brotherhood and harmony and reject those who try to wedge them apart for vote bank politics, Omar Abdullah told them to complement each others’ efforts aimed at welfare and development of weaker sections. He said some elements want to divide them for vested interests. He asked them to beware of this conspiracy and exhibit their unity in fighting poverty and injustice. He said National Conference symbolizes their aspirations and works for their unity to help their equitable, holistic and all round development.

“You are aware that the preachers and exercisers of ‘divide and rule’ politics have left you alone after getting your votes. Your representative under the command of its party (PDP) leadership choose to remain out of Assembly proceedings and did not voice your demands in the House for petty political gimmickry”, he said and advised the people to send such representatives in the Assembly who would stand for their cause and plead their demands vehemently in the floor of House.

Omar Abdullah referred to the comprehensive development process kick-started by his government in the State and said that thousands upon thousands big and small works completed in all sector of development are speaking for themselves on the ground. He said the process would continue and each area would get its due share.

On the various demands presented to him at the public meeting by the MLC of the area Javaid Rana in a memorandum, the Chief Minister said that he would depute, Minister for Planning and Development to the area so that demands are addressed amicably and purposefully through the development policy.