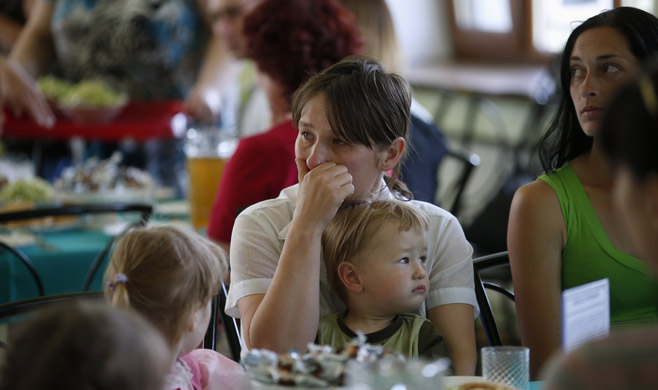 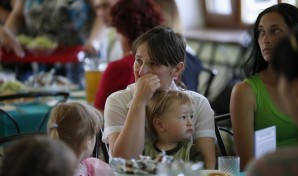 Some of the thousands of Ukrainian refugees who fled to Russia in fear of their lives from the protection from Ukrainian military and militia members. These include thousands of frightened women and children fleeing the conflict. Pictured here a worried mother and her babies being fed food and drink from Russian aid workers at a refugee camp.

On July 29, 2014 President Vladimir Putin had a working meeting with Presidential Adviser and Chairman of the Presidential Council for Civil Society and Human Rights Mikhail Fedotov. There the two discussed human rights concerns within the Russian Federation and Ukraine. He also briefed the President on the Council’s work since May 7, 2012, and also spoke about its current activities.

MIKHAIL FEDOTOV: “Sir, we worked on issues of Ukrainian refugees. Two days ago, we made a special appeal. Ella Pamfilova, Elizaveta Glinka and our Council – we made an appeal concerning sick children and children in need of immediate medical assistance in southeast Ukraine. Unfortunately, nobody is responding to our appeal; it’s complete silence. There is full understanding on the part of our authorities, but nothing from the Ukrainian side. It’s just astounding; how can this be? We’re talking about children! We’re talking about an entirely humanitarian operation – move the children out of there.

VLADIMIR PUTIN: It’s clear that the situation there is complex and the level of tension and antagonism is very high, but naturally, this is a very important humanitarian issue, and I would like to ask you to use your knowhow as a human rights activist to get an answer from your Ukrainian colleagues in an entirely non-confrontational, friendly manner, and to think through, together, how to arrange things to help those children. After all, we are helping the wounded soldiers of the Ukrainian army, we are accepting them in our territory and treating them, sending them back – and overall, doing this with consent from the Ukrainian authorities. I do not understand why, in this case, we cannot come to an agreement even about joint work.

MIKHAIL FEDOTOV: I also do not understand why we cannot come to an agreement; we are talking about children. All civilized nations save their children first in case of danger. And isn’t bombing a form of danger? This seems obvious.

VLADIMIR PUTIN: I understand, and you know my opinion on everything happening there: government power was taken by force, and now force is used against those who do not agree with this. I feel this situation is totally wrong; it should have been resolved in an entirely different manner. But you may have different opinions, different approaches, much softer and more humane, so to speak, and I very much count on you to succeed in reaching an agreement with your colleagues: Ukrainian human rights activists and the official authorities.

MIKHAIL FEDOTOV: So far, we have not had much success, although we are able to have contact with Ukrainian human rights activists – but unfortunately, not with the authorities, and surprisingly, we have been unable to establish contacts with the OSCE.

VLADIMIR PUTIN: We will try to help.

MIKHAIL FEDOTOV: Thank you, Mr President. That is very important.

And more on the topic of Ukrainian refugees. I was talking with the heads of many regions, and they are working on these problems. Here is what happens. At the Government level, there is a working group headed by [Deputy Prime Minister] Dmitry Kozak. He is dealing with all refugee-related issues. But he is not dealing with issues that are being resolved by volunteers, and volunteers are resolving a large amount of issues; they are very actively involved in this area. The volunteers are coordinating their own work, as much as they can, but they cannot coordinate the work of state authorities.

VLADIMIR PUTIN: So they need help?

MIKHAIL FEDOTOV: Yes. My suggestion is very simple: include representatives from our Council (perhaps two or three people) in Mr Kozak’s working group.

VLADIMIR PUTIN: Very well. The problem of refugees is becoming very massive; we now have more than half a million refugees in Russia. This requires attention and serious resources. For now, it’s still summer, it’s warm.

VLADIMIR PUTIN: But in two or three months, the situation will be different. People cannot be left in tents in that state.

MIKHAIL FEDOTOV: Members of our Council have visited many temporary accommodation centres. We have concrete suggestions, we have prepared them, and we are ready to give them to Mr Kozak’s commission.

VLADIMIR PUTIN: Very well, I will tell him.”