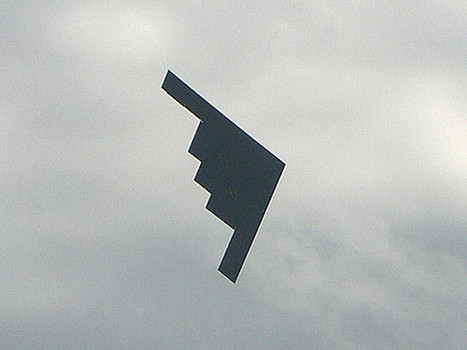 The B-2 Stealth Bomber looks like something straight out of a Batman movie. The idea of one of these flying over your house is disconcerting to say the least! Considering they could be carrying a nuclear bomb around.

In 2007, a guy posted an interesting video on Youtube called: “Stealth bomber flies over my house!! http://www.youtube.com/watch?v=Khuf_awXbAo&feature=related ).

The video went viral for about two second then disappeared for a long time.

I recently ran across them again and decided to do a quick story on it.

With help from a friend we were able to identifiy the aircraft in the video as the Northrop Grumman B-2 Spirit.

The B-2 Stealth bomber is a $2.1 billion dollar aircraft. It is capable of “cruising” at speeds in excess of 560 miles per hour at an altitude of 40,000 feet, according to Wikipedia.

Interestingly enough if you listen to the video closely you can hear the roar of giant General Electric F118 engines in the background.

These engines by the way were specially designed for the B-2 Stealth aircraft.

The video footage also shows the B-2 being escorted by two fighter jets, probably F-16’s flying on either side of the aircraft.

What is really frightening to think about is the fact that B-2 Stealth bombers are capable of deploying both conventional and nuclear weapons.

So it is a very sobering thought to have one of these aircraft doing “fly overs” of your neighborhood, when your children are playing outside in the backyard.

The aircraft could have been leaving for or returning from a combat support mission in Afghanistan for all we know?

It is unclear however if the B-2 was to be flying “so low over a residential area” like that in the first place?

Remarkably this is not the first time a Stealth bomber flew over the person’s house.

In a seperate link to a second video, we see second flyover (see video: Stealth Bomber flies over my house – AGAIN!! http://www.youtube.com/watch?v=wiOyd3Y898A ).

The second video is even more scary than the first, in my opinion because in the background you can hear a child say “there it is.”

Something about seeing the B-2 and hearing the child was, in many ways really too much for me to handle. After all the B-2 bomber could have been carrying around nuclear bomb.