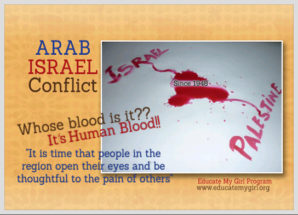 Arab-Israel Conflict. “Whose Blood it is?”

Recently, the bodies of Three Innocent Teenage Boys have been found in Israel’s occupied land who went missing a few days back. The Islamist group, “Hamas” is accused for this killing. My heart is sad and I want to talk about it.

I don’t know who would kill three teenagers. All I see is that there is so much hatred in this world that people could take innocent lives for no reason. Even if someone wants to prove his point, would some father or mother approve this act of violence? What was the reason for killing innocent teenagers? Now as these teenagers are dead, did the killer get his vengeance or retribution, and after the killing, did the killer get his justice?

Why is there so much hatred? I mean what is the need of it? It has been decades since Israel was proclaimed an independent nation. OK, Let us hypothetically assume that if one of the group gains control over the disputed land then what are you going to do with the people living there, are you going to kill them or relocate them? What is the solution that one has for the millions of Lives living on that land. Do you just want to remove people ( which includes Children, Women and the Old) just because you think they have no right to live on that piece of land.

I know this is a very old problem and the lives of many families are at stake. I don’t know how many people would read my message and how many people would echo the same sentiments? The only wish I have is to have a better understanding among the people of Israel and Palestine. I have always believed: “When human beings have a feeling of belonging towards a material, it is very hard for people to leave their claim over it.”  In such a situation, the practice of renunciation has proven good for all.

After reading about the Arab-Israel conflict, I have realized that this problem has increased with the passage of time. I am of firm belief that if a proper administration and perception is not created among the people of Palestine and Israel, the situation may go worse.

It is high time that people in the region open their eyes and minds, and be thoughtful to the pain of others.
History has taught us that killing has never brought any good for the society. Either society faced extinction or the offspring of that massacre has brought harsh environment for all who were involved. I feel deep pain for the families of the deceased. It is a heinous crime inflicted on the mankind by the killers of these teenagers.

I am very sad owing to the loss of young lives.  My Heart is sad in grief and I pray for their souls to rest in peace.

Human life is worth far more than some materialistic desire and one should not try to gain out of this misery. These are  very short  gains which leaves long  lasting scars on human minds and souls.

Arab-Israel Conflict, “Whose Blood is it?”

Author : Nandini Goel
Copying of Photo is Prohibited.
For Educate My Girl Program 2014

If you like our article do visit and join our club at www.educatemygirl.org/blogs

Filed under: Journalism, News
Share Tweet Pin G Plus Email
previous article: Bogus explanations and excuses given by members of the House for missed or mistaken votes on important legislation
next article: Everybody knows the dice are loaded, Amanda Knox, Raffaele Sollecito