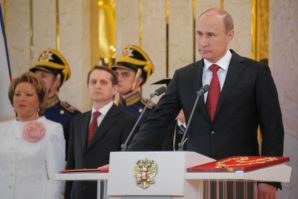 “There is no Russian invasion of Ukraine,” the Russians claim. “The troops who invaded buildings, hold airports and occupy the Crimea Parliament are not Russian.”

Although they have signs and flags, to claim that Crimea is Russian. Right!

The current Putin’s provocations are just his way to show we are entering in a new Cold War time and that he’s Russia’s new Tsar. Not “Tsar” as the “big boss,” which is usually the way we use the term, but “Tsar” as the supreme leader of Russia, chosen by God.

And Putin’s dream for Russia is Hitler’s Germany. Large, powerful and unstoppable… Unless we act now, his dream could mean big trouble for Europe, again.

Remember 1938. The Sudetenland pro-Nazi region of Czechoslovakia demands autonomy because of its population and, more importantly, under Hitler’s plans to invade the country, first step towards Germany’s expansion in Europe.

“I demand that the oppression of 3 ½ million Germans in Czechoslovakia cease and that the inalienable right to self-determination takes place.” (Hitler, 1938)

Because France, the UK and Czechoslovakia want to avoid war, British PM Chamberlain believes the grievances are justified and that, anyway, Hitler’s intentions are limited – sic! 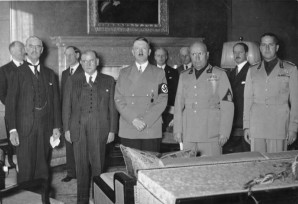 If we were learning lessons from the past, we would not make the same mistakes over and over, again! Today’s Ukraine is yesterday’s Czechoslovakia and Vladimir Putin believes he is the unstoppable Tsar of Russia.

He started with Georgia, with the 2008 South Ossetia War.

Now, by saying “Russia reserves the right to protect legitimate interests of its citizens & military personnel,” Putin creates a disastrous precedent. A precedent for Russia to invade former soviet nations, for China to invade Taiwan and the Senkaku Islands in Japan, for Argentina to invade the Falklands, and for any other country to invade whatever neighbour they wish.

Stop him now… or face the consequences!