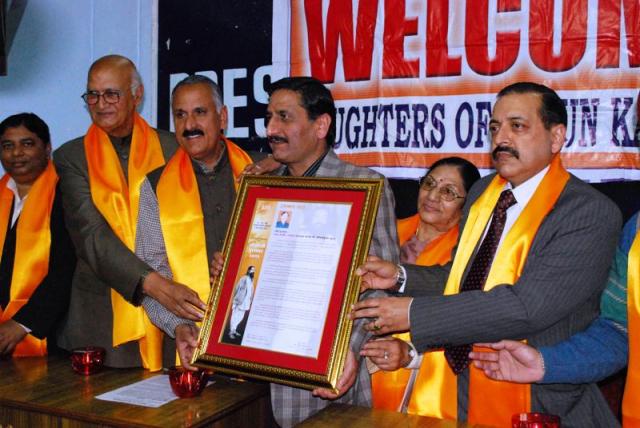 Jammu, March 6 (Scoop News) –  Ashwani Kumar Chrungoo, President, Panun Kashmir today said that the struggle of the displaced community, which is the indigenous community of Kashmir , has regional, national and international dimensions


Ashwani was speaking in the function of Shivratri Milan organized by Daughters of Panun Kashmir’(DOPK) today in . The programme was presided over by Moheni Raina, Chairperson, DOPK. Shamsher Singh Manhas, President, BJP (J&K) was the Chief Guest while Dr. Ramakant Dubey, President, VHP, Shri Ramesh Pappa, Sah-Prant Pracharak-RSS and Dr. Jitender Singh, prominent intellectual of were the guests of honour.

Ashwani Kumar in his speech said that the inauguration of the vindicates our stand that ‘rehabilitation’ and ‘resettlement’ are two different issues. The resettlement in is purely a political issue which needs to be dealt at a political level for which Panun Kashmir has already given its blue print in the shape of Margdarshan resolution.

results.
Speaking on the occasion, Shamsher Singh Manhas President, BJP (J&K) lauded the efforts of the activists of Panun Kashmir and said that the cordial relationship of Panun Kashmir leadership with the BJP is reflective of BJP’s relationship with the Kashmiri Pandit community. This community has been in the forefront of the struggle for national cause and its displacement from is a national concern.

He said BJP has always stood by this community and will do whatever is possible to mitigate its sufferings. He congratulated Shri Chrungoo for receiving the prestigious award and termed it as recognition of the efforts of the nationalist forces in the state.

Earlier the activists of DOPK presented special Shivratri Mementos and Saropas to the dignitaries present in the function. Sardar Inderjeet Singh, a prominent photojournalist of was honoured with a Shawl, Saropa and special memento on the occasion in recognition of his services in the field of positive journalism.

The Award received by the President of Panun Kashmir, Ashwani Kumar Chrungoo in Konkan, last Sunday was also displayed in the programme. The “Shri Guruji National Award-2011” which was given by the RSS Jan Kalyan Samiti, Maharashtra, to Ashwani Kumar Chrungoo for his and his organization’s brave and consistent efforts in the struggle in exile of the Kashmiri Hindus comprises a shawl, an amount of Rupees Fifty one thousand, memento, flower bouquet, shreefal and a citation highlighting the achievements of PK and Shri Chrungoo.