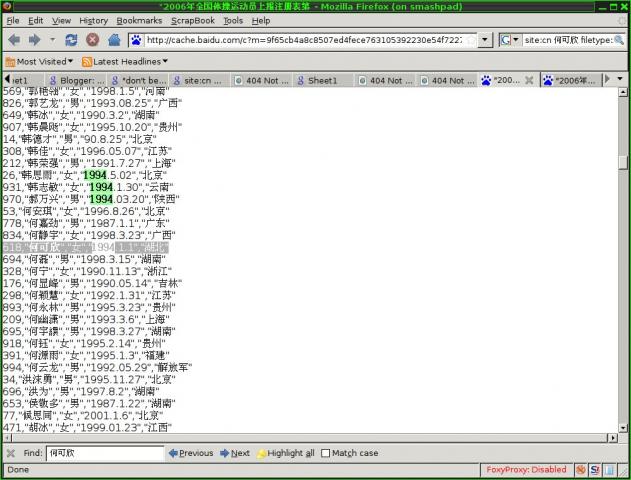 Millions of viewers of this summer’s Olympic games have asked themselves the following question: Is Chinese gymanst He Kexin really 16 years-old? This week, a blogger who calls himself Stryde Hax has unearthed documents that say He is under the requisite 16 years-old and is really 14. The International Olympic Committee, the group that originally approved He’s reported age, is calling for an investigation.

CNN reports that Stryde Hax is the alias of an American security expert named Mike Walker. On his blog, Stryde Hax walks through the simple steps he took to uncover a spreadsheet, issued by the General Administration of Sport in China, that lists He Kexin’s birthday as January 1, 1994. If that is correct, she is only 14 and violating Olympic rules. Stryde Hax used the Chinese search engine Baidu to discover the recently deleted documents.

Research by the New York Times produced the same results and indicted two other members of China’s six-woman gymnastics team as being under age. The Times discovered a biography of He Kexin that also lists her birthday as January 1, 1994. Her teammate Jiang Yuyuan is listed as 14 years-old in a number of documents including a competitors list for a local gymnastics meet and on her national identification card. A third team member, Yang Yilin, is 15 years-old, according to a Chinese Web site.

What do these new allegations mean? First, the International Olympic Committee will take a serious look at the Chinese team and, and if these accusations are verified, they might strip the athletes of their medals. It also shows that any inquisitive mind with an internet connection, like Mike Walker and Stryde Hax, can break internationally relevant news.