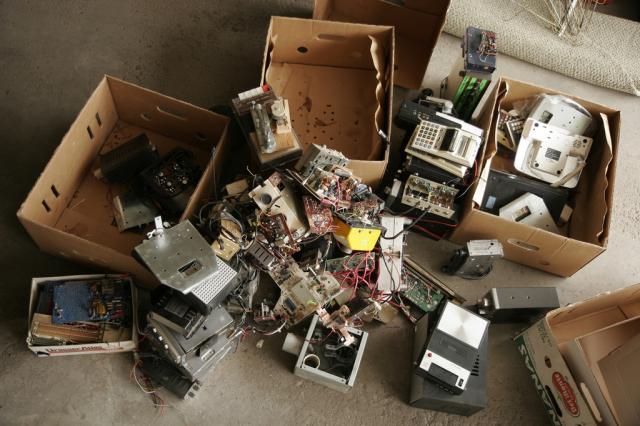 RICHMOND, Va. – Take the R out of recycling and what do you get? E-cycling, an event where students recycle obsolete MP3 players, televisions and other electronics so those products don’t pollute landfills and groundwater.

Those products contain toxic chemicals – and it’s crucial to keep them out of landfills, said Amy Watlington, an officer with Green Unity.

“Mercury from something like a battery can get into a landfill and kill living things,” Watlington said. “It is also very toxic to the soil that farmers use.”

Consumers often have to pay a fee to recycle electronics. Green Unity wanted to offer VCU students a free outlet for e-cycling.

The event also was an opportunity to educate people, Watlington said. “Before I joined Green Unity, I didn’t know I could recycle electronics.”

Dozens of students came to the event, which was held in the Student Commons on Wednesday. They dropped off everything from old power cords and broken microwaves to worn-out batteries.

Chloe Santulli, another officer with Green Unity, was thrilled to see so many students bringing in electronic devices. Santulli said they can be used elsewhere instead cluttering landfills.

Green Unity partnered with an organization called First and Second Solutions to collect the items for e-cycling. This group breaks down the devices and determines which parts can be used to make other things.

“They know the right way to recycle it,” Watlington said.

Elle Chang, one of the founders of Green Unity, said the process of recycling electronics can be expensive because experts must be hired to pick up the electronics and decide what can and cannot be re-used.

“The VCU Theater Department has recycled thousands of dollars worth of old batteries,” she said.

Green Unity’s presence on campus has been influential in the environmental efforts at VCU. For example, the group prodded VCU to increase the number of on recycling bins on campus. The organization has received a lot of positive feedback about recycling and e-cycling at VCU.

“Administrators and professors have been asking what they can do to help out our cause,” Chang said.

Green Unity 4 VCU will hold a community clean-up March 27. Volunteers will meet at 2 p.m. at the Village Café.

The group also is planning an Earth Day celebration on April 21 in Monroe Park,