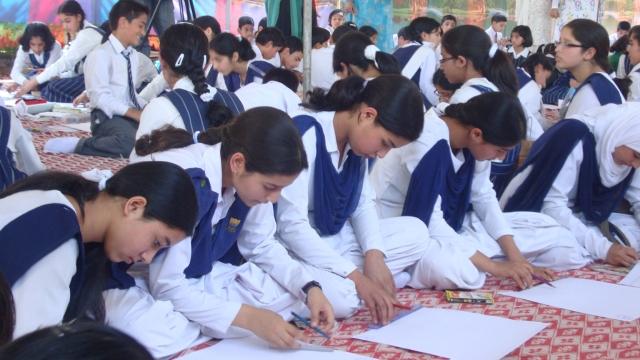 Jammu/Bhalwal, September -Politicians in Kashmir valley may have been blaming the separatists leaders to have played havoc with the education system by forcing the closure of the educational institutions  for over last two months but students studying in a government higher secondary school in Bhalwal were treated shabbily by the mainstream politicians on Monday as they were tasked to ferry water bottles and provide chairs to them on the occasion of a political rally inside the school premises.

According to leading news agency Kashmir Independent Press (KIP) the school going children could not complain to their teachers as they were also shunted out of their offices and classrooms to take care of the basic and urgent needs of the political masters present in large numbers.

KIP in a news bulletin said that the state Chief Minister Omar Abdullah was himself present on the occasion along with members of his council of ministers.Along with school students the local residents in the area who visited Primary health centre, Kot Bhalwal also faced many hardships as the main road was closed by the security personnel to ensure tight security.

The entire political show made mockery ofthe school education system as teachers were pushed by the state education department to hold regular classes without bothering to know whether  the students would be able to study properly under such circumstances.Large number of class rooms were found locked as the chief minister stood in front of the classes,KIP said.

KIP quoting school students said, "after enjoying long sunday holiday when we reached the school on Monday morning we were all surprised to see strict security arrangements around the school premises".

After some time as rush of security forces increased ahead of arrival of the VIP’s we were informed by the school Principal to gear up for the long day ahead.

"Instead of attending the classes we were asked to standby for ferrying water to the political leaders besides taking care of other jobs".Meanwhile, when the school principal was asked to comment why the school premises was allowed to be used for the political rally he chose to stay mum and informed that the security personnel had taken control ofthe school premises since sunday and even his own office was seized by them and used as control room to monitor the movement of the people.(KIP)