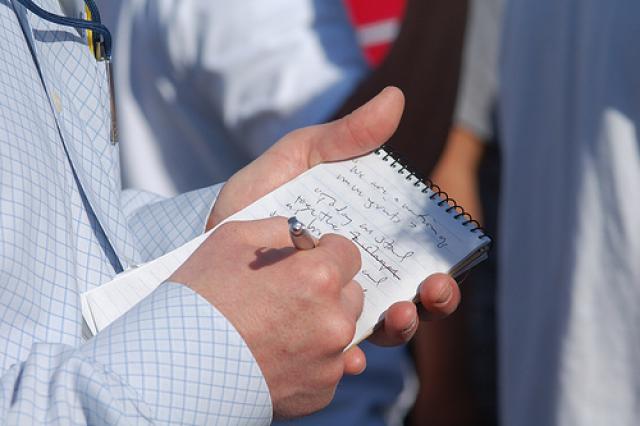 RICHMOND, Va. – Colleges and universities sometimes deny student journalists access to information that by law should be open to the public, a campus newspaper editor told the Virginia Coalition for Open Government on Friday.

Katie Thisdell, editor-in-chief of The Breeze at James Madison University, said officials at the Harrisonburg school treat the twice-weekly student newspaper differently from “real news organizations,” such as the Richmond Times-Dispatch.

“It’s because we’re students, and students might not be properly trained,” Thisdell said. “When (her staff) tries to get information from the budget office of the school, they tell us to send an e-mail. But if the local newspaper calls, they get the information like that.”

Thisdell was one of three panelists who discussed college journalists’ rights under the Freedom of Information Act. The discussion was part of Access 2010, VCOG’s 11th annual conference, held Friday at the state Capitol.

Larry Hincker, head of university relations at Virginia Tech, said he would be disappointed in his colleagues at JMU if they treated student journalists differently from reporters from off-campus media.

“These are our students, and we might have a problem communicating, but I still take seriously our role as educators,” Hincker said. “You have to understand that you’re going to be dealing with someone who is not going to have the perspective of a reporter with the experience of three to four years.”

Brian McNeil, a reporter for The Daily Progress in Charlottesville, said students have the same rights as other journalists under FOIA, the law that ensures citizens’ access to government documents and meetings.

All students have the “right to know,” McNeil said. He said students can submit a formal FOIA request if they have problems getting information from a school. By law, public universities and other governmental entities must answer such requests within five days.

Hincker, Tech’s chief spokesman, said he doesn’t recommend going straight to FOIA. He said he believes a formal FOIA request should be a last resort.

Hincker suggested that student journalists first contact their school’s public affairs office and search the school’s website for the information they’re seeking. Universities are not trying to hide anything, Hincker said.

After the massacre, reporters from throughout the world converged on the Blacksburg campus, and Hincker said Tech had a difficult task answering questions from so many journalists. The solution, he said, was to hold press conferences.

“Being open and transparent as possible is really what guided the university through the process,” Hincker said.

The panelists all agreed that student reporters need more formal training – for covering crime on campus and for utilizing FOIA after college, for example.

Thisdell said student reporters don’t always get access to police arrest records even though they have a right to such information.

Moreover, reporters may face a violent “backlash” from students who have been arrested and are subsequently identified in campus news stories, Thisdell said. Most student reporters have no training on how to deal with that.

Despite such obstacles, student journalists will persevere in seeking information and printing the truth, Thisdell said.

“Students on campus have the right to know what is going on,” she said.

Experts: Use Technology to Open Government