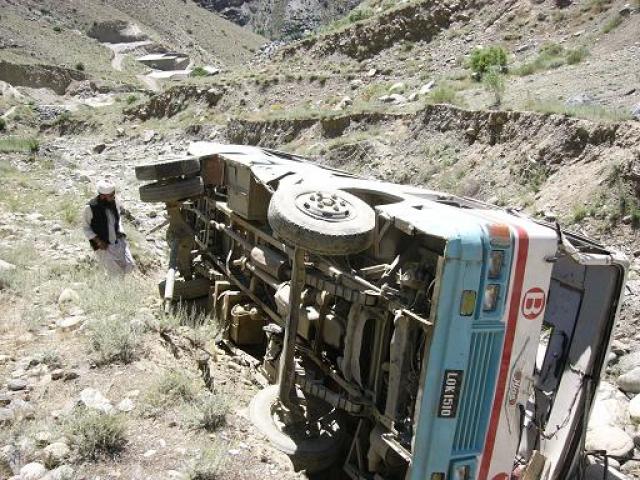 CHITRAL:  As well as 19 students of G.D. Lingland School and College Chitral  injured badly when a school Bus plunged into deep ravine. According to Chitral police School Bus bearing registration No LOK 1510 was carrying students of the school to Dolomus. When this bad luck Bus reached near Dolomus its engine stopped due to ending of fuel or some any other technical fault eye witness disclosed this scribe. Hence the driver Hayatur Rehman stopped it and came down along with cleaner of the Bus. Eye witness told this scribe that the Bus moved automatically in reverse due to standing on a ascent (height) slope. During this period 73 students were setting in the bus and 53 of them also came down when Engine of school Bus stopped and it stand on the main road. But 20 students were setting inside the Bus. The Bus was climbing on a ascent and slope road when its engine stopped and the driver stand it with an non-technical way. As a result it moved on reverse side but the driver was a silent spectator. As a result the Bus fell down in hundred feet deep ravine and 20 children inside the Bus were crying. They were survived miracle way.  The injured students were immediately rushed to District Headquarters hospital Chitral where they were given first aid and early treatment on emergency basis under the supervision of Dr. Nazir Ahmad medical Superintendent of DHQ Hospital Chitral.

A student of class 7th of this school who was eye witness and miracle survived in this fatal accident he told this scribe that they were going to their school when their school Bus reached near Dolomus at 8.0 O’clock engine of the Bus stopped automatically due to no fuel in the bus. The driver stand it in neutral gear  and he came down to check it. When he and cleaner of the Bus came down the Bus moved rapidly because it was standing on a height and was coming back. There were 73 students onboard in bus hence some 53 were come down when it was stand due to fault. And the bus was taking somersaults and fell down in hundred of feet deep ravine. He said that I and  my other colleague were inside the bus and we were crying and  soughing help and became unconscious. And when I opened my eyes I found my self in the hospital bed. He said that we paying rupees 600  for transport and 500 as tuition fee on monthly basis but even than the school administration setting more students and almost all the school Bus facing overloading. The bus having capacity of only 25 students but there are 73 students daily he added.  He also said that Buses are usually remain faulty and out of order. Bashirud Din a local mechanic also termed it over loading