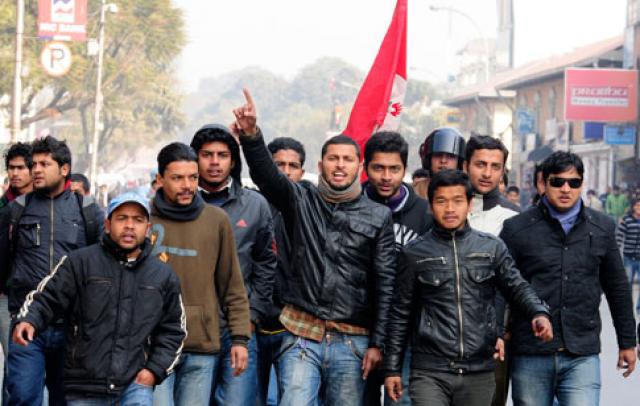 Kathmandu, Jan 19: Saying no to the petrol price Hike, the students union of the 13 political parties have issued a 24-hour ultimatum starting 10 am Thursday to the government to take back the fuel price hike decision. The government recently revised the petroleum prices considering the futile state of the Nepal Oil Corporation.

According to the Unions, “The prices of the petroleum products have rocketed and it’s very hard for any normal Nepali to survive. The government cannot raise the prices like this, they need a solution to the problem they cannot create another problem with this issue. We had submitted a memorandum to the government, when the fuel prices were last raised, and they had committed to provide some relief then but nothing happened and now this rise is too much.”

They further added, “If the government doesn’t back out from their rise we will take it to streets and it’s for sure that they have to understand the power of people.”

The youth associations have already declared January 25,2012 as valley banda. The students’ leaders also urged that there should be uniform system to check and balance the prices of petroleum product and regardless of what the poor and under privileged have to be considered in this regard.

Filed under: Opinion, Politics
Share Tweet Pin G Plus Email
previous article: “Not So Deep As a Well: Collected Poems” by Dorothy Parker
next article: Special announcement for stranded passengers in Kashmir