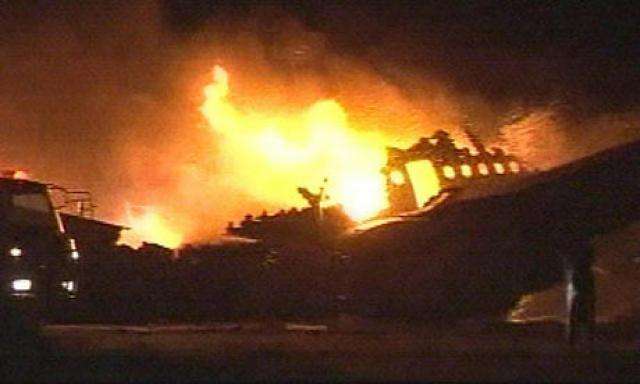 A Sudanese jetliner veered off a runway late Tuesday amid thunderstorms and exploded into flames, killing about 100 people, says report. However the official death toll was reported to be 28, with about 60 passengers still unaccounted for.

About 200 passangers were thought to be aboard the plane when it landed in bad weather and a higher casualty toll was feared. Though bad weather is said to be the cause of the disaster, officials have denied it. Reports reveal that the plane crashed to land, split into two and caught fire.

Though the officials could not confirm how many were killed it is known that most of the passengers were able to make it out and escape. Youssef Ibrahim, director of the airport, told Sudanese TV that the plane had "landed safely" in and that the pilot talked to control tower and got directions for his landing runway.

"At this moment, one of the (plane’s) engines exploded and the plane caught fire," Ibrahim said. "It’s a technical reason," he added, denying reports that bad weather caused the crash. He said there were survivors, but gave no figures.

A flight list had a Sudan Airways 109 flight from scheduled to arrive in at the time of the accident.

Sudan Airways Web site says Amman-Khartoum flight is an Airbus A310. has a poor aviation safety record. In May, a plane crash in a remote area of southern killed 24 people, including key members of the southern Sudanese government.

In July 2003, a Sudan Airways Boeing 737 en route from to crashed soon after takeoff, killing all 115 people on board.

After that crash, Sudanese officials blamed sanctions for restricting vital aircraft parts. The US State Department said there was no ban on equipment needed for aviation safety.