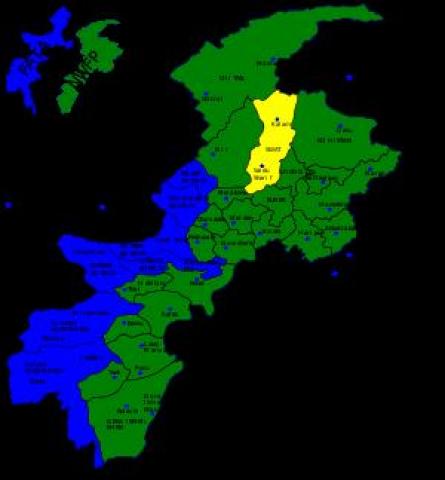 Maj Gen Athar Abbas the Pakistan military spokesman said over the telephone from Rawalpindi “We suffered two casualties in the unprovoked ambush on our convoy in Matta tehsil,” He added the Pakistani government had been told of the attack.
“Security forces are making movements without any prior information, which force Taliban to carry out attacks,” said A Taliban spokesman Muslim Khan took responsibility for the attack. He added “We do reserve a right to defend ourselves.”
Muslim Khan told “We had an agreement that whenever (the) army wanted to move, they should inform us, so that we can alert our men not to feel threatened.”

The attack on the security convoy came as Sufi Muhammad – credited with brokering the peace deal with the Taliban and the government on the basis of the implementation of shariah in Malakand division – also accused the government of violating the truce.
Sufi Muhammad said at a press conference, “I will abandon efforts for peace if the security forces and the government continue violations of the peace accord,” He added he was satisfied with the way Mullah Fazlullah, Sufi’s son-in-law, was leading the Swat Taliban. “The Taliban are doing nothing wrong … the government is responsible for violations.”
Spokesman Abbas, denied that the army had violated the truce. “We did inform the peace committee about our movement, but it cannot accompany us everywhere,” he said.

Local sources said security forces fired at Taliban positions after the ambush, and a person was unofficially reported killed.

Official sources in Peshawar said certain quarters within the Swat Taliban “do not support the truce, and Sufi Muhammad is unlikely to succeed against those who are still armed”.

The sources said “There are elements with the Taliban who are unhappy with what Sufi Muhammad is doing for peace. We are concerned by their ability to harm the chief of the banned Tehreek Nifaz-e-Shariat-e-Muhammadi chief.”