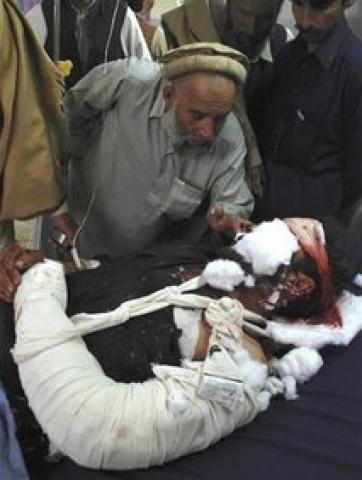 Jamrud, Khyber agency: A suicide bomber blows himself up at the biggest gathering of Friday prayer in Jamrud.

At the Friday meeting prayer in one of the mosques of Jamrud, a town of the tribal region of north western , where in a suicide attack, some 70 people are reported killed while some 160 injured.

Emergency has been declared in all the hospitals of and the injured were rushed to the nearest hospitals, and Hayatabad complex and some people were taken to Lady Reading hospital of the old city.

The death toll may rise because still the dead bodies are being recovered from the debris of the mosque; in addition, the mosque is totally demolished.

Let me add few things here that Jamrud, located on the main Torkham highway, the main NATO supply route that connects with .

In past, this supply route was attacked by the insurgents and the convoys of the NATO supplies were set ablaze in the area.

The check post of the Khyber Khsadar Force, a paramilitary force of the Khyber agency is also demolished and 10 people of the force are also reported killed in the attack, present in the mosque.