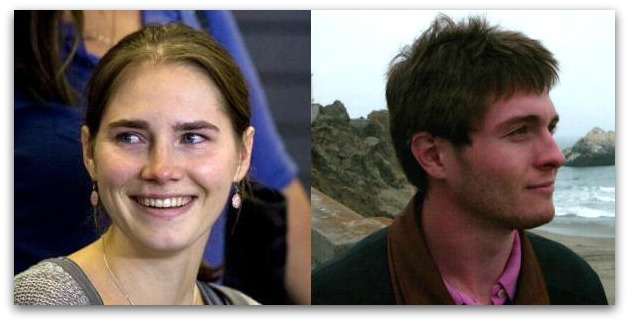 In December of 2011, I wrote an article detailing the work of Injustice in Perugia (IIP), a grassroots organization that came together in an effort to help correct the wrongful convictions of Amanda Knox and Raffaele Sollecito. Amanda and Raffaele were wrongfully convicted in December 2009, for the murder of Meredith Kercher in November 2007. Both were acquitted on appeal in October of 2011, after spending 1427 days in prison for a crime they did not commit.

In the article discussed above, I reported that there was no longer a need at the time for IIP to publicly advocate for Amanda and Raffaele after they were acquitted. Both were free and ready to move on with their lives.

The IIP website remained online for those seeking information on the case but updates became rare. At that time our group announced the creation of “Injustice Anywhere,” a new project designed  to expand our efforts so we could begin working to help other victims of wrongful conviction.

Today, Injustice Anywhere is going strong. The organization is currently working on a carefully selected group of cases that include; Ryan Ferguson, Jeffrey Havard, Kirstin Lobato, Debra Milke, and Jamie Snow. Jason Puracal was recently removed from the list because he was exonerated. We are hopeful that Debra Milke’s name will soon follow. Debra had her murder conviction overturned in March of this year by the 9th U.S. Circuit Court of Appeals. Arizona is appealing the decision but we are very hopeful the appeals court ruling will stand. Debra has spent 22 years on death row for a crime she did not commit.

With our current focus on other cases, we were honestly caught off guard by the recent ruling in the Amanda Knox and Raffaele Sollecito case. We were confident in the ruling made by appeals court Judge Claudio Pratillo Hellmann in October of 2011, that declared Amanda and Raffaele Innocent and set them free.

Unfortunately, common sense was thrown out the window when Hellmann’s decision was recently overturned by the Italian Supreme Court, sending the case back to the appellate level for review. The new trial will be heard in Florence, and regardless of the outcome, believe it or not, that decision will be appealed as well.

The Italian legal system will prolong this case for another 3 to 4 years, maybe longer. There is no doubt that the truth will forever be clouded in the process. Americans observing the case may also be shocked to see acquittals being appealed by prosecutors. This practice is unheard of in the United States but is common in Italian law.

Recent events have sounded an alarm that is loud and clear. The grassroots organization known as Injustice in Perugia must become publicly active again. It is important to note that private support has never declined. Our relative silence certainly did not signal a lack of resolve, but rather showed the desire to give Amanda and Raffaele the privacy they deserved as they began to live again. We have no intention of changing course in that regard. Amanda and Raffaele remain free and now have their own voices. Both have written books to discuss their plight. Raffaele’s book “Honor Bound: My Journey to Hell and Back with Amanda Knox” was released in September 2012, and Amanda’s book “Waiting to Be Heard: A Memoir” is set to be released April 30, 2013.

Injustice in Perugia will continue to provide support by working diligently to present the truth about this case to the public for the duration of the court proceedings. We have now updated the content of our fully redesigned website in order to provide easier navigation as you browse through a wealth of information. Injustice in Perugia will forever remain the most comprehensive website detailing this case. 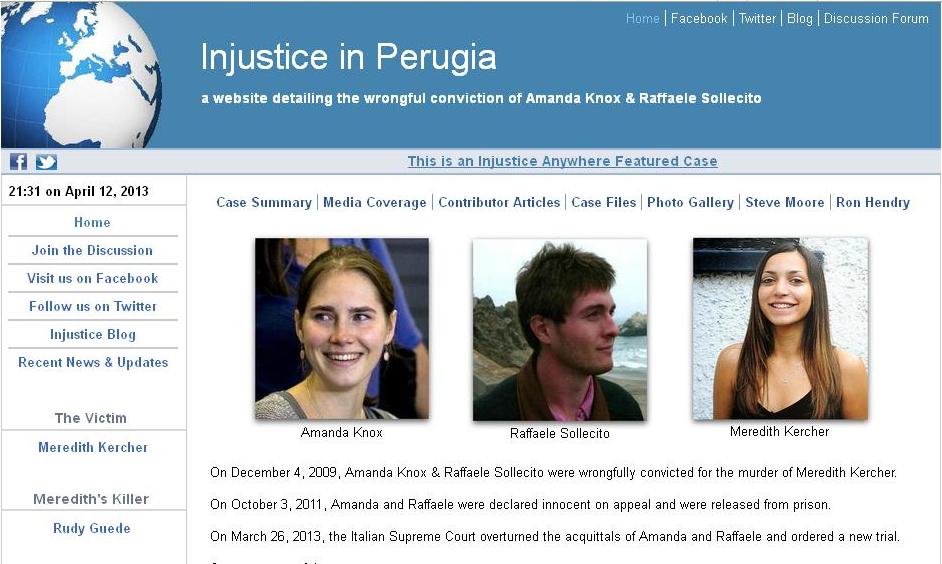 We also encourage you to visit the Injustice Anywhere Forum. The Amanda Knox Case Public Discussion thread on the forum has remained very active since the acquittals. Everyone is welcome to join in on the conversation. During your visit we suggest that you browse through our other cases and make a serious effort to get involved.

What does the future hold for Amanda and Raffaele?
Amanda and Raffaele are considered legally innocent and will remain free while the appellate court reviews (currently unknown) aspects of the case. The Italian Supreme Court has ninety days from the date of their ruling to release a motivation document detailing the reasons for their decision. Injustice in Perugia will provide updates as they become available.

The truth in this case is clear for anyone willing to see it. Rudy Guede murdered Meredith Kercher and he acted alone. Guede was sentenced to 30 years in prison for the murder. His sentence was reduced to 16 years on appeal and was later confirmed by the Italian Supreme Court. Sadly Guede will be eligible for work release as early as 2014. Meredith’s killer will be free while two innocent people continue to be persecuted. The damage in this case is irreparable. The system failed to bring justice to the murder victim and created additional victims in the process.

Amanda Knox and Raffaele Sollecito are innocent. Support for Amanda and Raffaele is stronger than it has ever been and that support will not waver. The fight will go on for as long as it takes for the truth to prevail in Italy.

Please visit www.injusticeinperugia.org to learn more about this case.