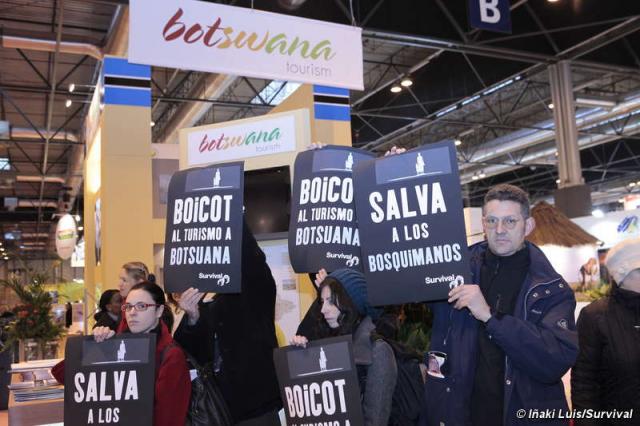 Visitors to the international tourism fair in Madrid were today met by Survival protestors calling for a boycott of tourism to Botswana. â€¨

The protestors, angry at the Botswana government’s treatment of the Kalahari Bushmen, stood beside the Botswana Tourism Organization’s stand inside the fair, holding placards that read, ‘boycott Botswana tourism’ and ‘save the Bushmen’. â€¨

Survival has called for a boycott of Botswana tourism and diamonds until the Bushmen are able to live on their ancestral lands inside the Central Kalahari Game Reserve in peace.â€¨

For thirteen years, the Bushmen have been persecuted by the Botswana government. In 2002, they were forcibly evicted from their lands by the government to make way for diamond mining.

In December 2006, in a landmark ruling, Botswana’s High Court ruled that the government’s evictions of the Bushmen had been ‘unlawful and unconstitutional’ and that the Bushmen have the right to return to their lands. Four years later, the government insists on making life in the reserve impossible, by banning Bushmen from hunting and denying them access to their water source: a well which it sealed in order to drive the Bushmen off their lands.â€¨

The Bushmen are currently back in court in a bid to gain access to the well. Meanwhile, the government continues to promote tourism in the reserve, and has allowed Wilderness Safaris, a tourism company, to open a luxury safari lodge, complete with swimming pool, on Bushman land.â€¨

The government’s treatment of the Bushmen has received harsh criticism from the African Commission on Human and Peoples’ Rights, and by the UN’s top official on indigenous peoples who has described the conditions faced by the Bushmen as ‘harsh and dangerous’ due to a lack of access to water. â€¨

A Survival International spokesperson who attended the protest said, ‘Anyone who cares about human rights should not travel to Botswana. If they do, they should be aware that they are supporting a government which profits from destroying the last hunting Bushmen in southern Africa. The moment the Bushmen are treated with fairness and humanity – but not before – we will drop the campaign, once and for all’. â€¨

To read this story online: http://www.survivalinternational.org/news/6890