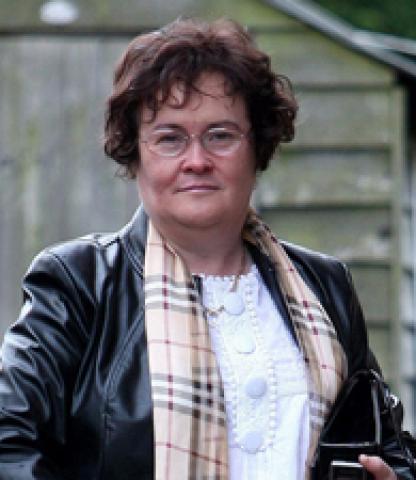 By Rachel Balik
“Britain’s Got Talent” sensation Susan Boyle wowed audiences with the disconnect between her dowdy appearance and her gorgeous voice. How will they react now?
Fans, producers and the media are uncertain of how to respond to a new, more polished look from “Britain’s Got Talent” sensation Susan Boyle. She has recently appeared with her gray hair dyed brown and noticeably thinner eyebrows. A British publicist told The Associated Press that Boyle was running a risk by becoming more stylish, because her connection to audiences was based on her ordinariness. But others, particularly women, are sympathetic.

Boyle struck a chord with audiences because she proved that talent could overcome physical appearance; but now, she is constantly photographed and subjected to the pressures of media attention.

Even so, Boyle’s makeover was relatively simple, and cost £100 (approximately $150 U.S.), the Daily Mail reported. “Britain’s Got Talent” judge Amanda Holden has said that it is important for Boyle not to change her appearance, but a spokesperson for the show said that Boyle was free to do as she liked with her hair.

The previously dowdy Susan Boyle was only able to get the courage to audition for “Britain’s Got Talent” after the death of her mother, who had always told her she would be successful. When she came on stage, the audience snickered and the three judges smirked and looked incredulous. She had frizzy hair, overgrown eyebrows and wore a frumpy dress.

After her stunning performance of “I Dreamed A Dream,” Simon Cowell declared her performance worthy of the most definite “yes” he had ever given. Judge Amanda Holden told her that prior to hearing her voice, the whole audience had been laughing at her. Boyle became a sensation immediately.

Barb Shelly, a columnist for the Kansas City Star, urges readers to remember that Boyle’s talent is the same, regardless of her looks. The shape of Boyle’s eyebrows should not affect her singing in any measurable way. The column notes the irony that while she won audiences over with her voice, the world is now focusing all its attention on her appearance.

Robin Givhan for the Washington Post gave an emphatic vote in favor of a makeover last week. She says that Boyle triggered our “cultural ambivalence about appearance,” and notes how hard stars must work to appear as beautiful as they are. We resent them and admire them simultaneously. We like Susan Boyle because she’s an ugly duckling, but that means that in order for the story to be complete, she must turn into a swan. She will not lose her quirkiness, but she has a right to live her fairytale.