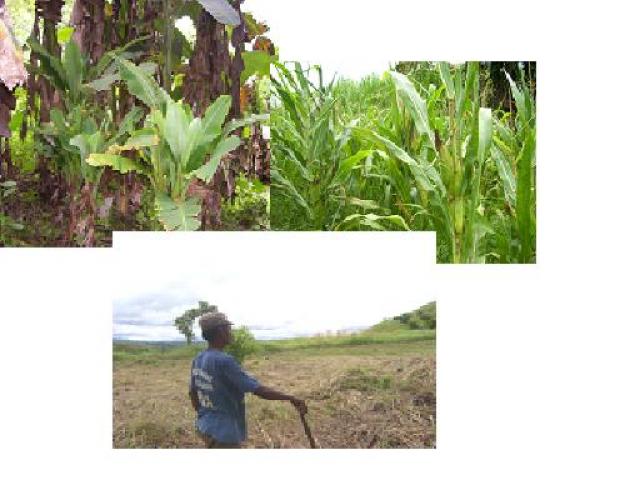 Given the agricultural situation in the province of Kalinga where some areas are devoted to rain-fed production, this undertaking was formulated to answer the very pressing problem of food scarcity, and environmental degradation.

Clearly, there is a need to solve the immediate subsistence needs of the farmers while taking into consideration the practices that would pose no harm to the environment.

This study is focused on the optimized management of natural resources in the dry areas, resulting to sustained productivity while preventing soil degradation. It is targeted to pre-selected agro-ecologies and socio-economic environment in three municipalities in the province of Kalinga – namely, Rizal, Tanudan, and Pinukpuk.

It takes the approach of introducing a rational use of land-based technologies derived from the farming systems conducted at the Kalinga-Apayao State College, and the all-too important involvement of farmers by way of participatory planning.

Thus, piloting of cropping systems and improved production techniques using different related studies that were developed in KASC took place in the aforementioned areas. Prior to this was a three-directional methodology:

(1) Collection, Assembly and Analysis of Data on Soil, Climate, Crops and  Inputs;

(3) the development of a farm model.

Having involved the farmer cooperators all throughout the program, this undertaking was able:

(a) to increase the knowledge of farmers and are now circulating the know-how among themselves;

(b) to put in place better land preparation; and

It was found out that farmers are willing to take risks when they are fully convinced with a technology – regardless of its simplicity or complexity.

This study focused on the optimized management of natural resources: – soil and water – in the seasonably dry areas for sustained productivity of rain fed Agriculture and prevention of soil degradation.

It addresses selected agro ecologies and socioeconomic environment in the 3 municipalities of Kalinga particularly the municipalities of Tanudan, Pinukpuk and Rizal where improved technologies were transferred through a partnership forged by the Kalinga Apayao State College and the Local communities to maximize production and improve the prosperity of farm families living in abject poverty. This was achieved by the introduction of a rational use of land-based technologies derived from the farming systems tried by the Kalinga Apayao State College in collaboration with the Commission on Higher Education.

Involving the farmers through participatory planning and sustainable production had fine-tuned the technologies being disseminated, and which eventually overcame the pressing problems.

One of the thrusts of the government is food security with emphasis on sustainable agriculture. This thrust is incorporated in the curriculum of Agricultural Schools – with stress on the proper use and management of natural resources.

The basic needs of humanity – food, clothing, shelter, and job – must be met. These must be given attention, as the world in which poverty is endemic will always be prone to ecological and other catastrophes.

Development is not absolute but it can be significantly be attained through technology, coupled with social organization. Together, these two shall have an impact on environmental resources as well as on the biosphere’s ability to absorb the effect of human activities.

Both technology and social organization can be improved to make way for a new era of environmentally sensitive economic growth.

This process of change can be achieved in the field of agricultural development through improved agricultural food production and environment protection.

Agriculture has caused many changes; rural environment in most parts of the world has been transformed. The government has encouraged the adoption of modern varieties of crops and modern breeds of livestock together with the associated packages of external inputs (fertilizer, pesticide, antibiotics, credit, and machinery) necessary to make these productive.

Of the different agricultural methods, the traditional method is unimproved.  This is evident in our province.  Agricultural yields are low due to limited farming resources. Add to this the fact that farming system is complex and diverse.

Low-income farmers are found in areas of the province where access to irrigation is impossible; areas are prone to environmental degradation; and areas are rarely visited by agricultural scientist and extension workers.  Thus, farmers here are solely dependent on nature to nurture their crops.

Farmers themselves face ascending costs in the process of adopting and venturing into a more comprehensive farming system as they quest for learning new management skills.

The province of Kalinga lies at the central part of Cordillera Administrative Region. It is land-locked and bounded on the North by the province of Apayao, East of Cagayan and Isabela, South of Mountain province and West by Abra. Kalinga has a total land area of 307,100 square kilometers with 8 municipalities, generally rugged in topography. Of that area, 570 hectares are sustainably utilized and 493 hectares are identified as development opportunity areas viable and suitable for a year round productive venture given the chance, and with appropriate farming system that is adaptable to the conditions of the area.

The presence of the Chico River dam divides the socio–economic status of the farmer utilizing the land for agriculture endeavor. The first group enjoys the blessings of the Chico River dam. Although they comprise only the minority group, they seem to better economic well being provided by the irrigation system. The other group which comprises the bulk of farmers is only dependent on the rain which is considered as a blessing from the sky.

The three identified municipalities are characterized by mountains, rolling hills, plateaus and valleys with climate categorized under type 111 classification of the Weather Bureau.

Generally, the intended beneficiaries of the project lives way below the poverty line with an average family income of P5000/annum. Several factors limit the chances of the farmers to gain higher income due to primitive farming systems coupled with the escalating inputs and absence of an irrigation system which could not be attained as the area is rainfall dependent.

Addressing this hindrance of uplifting the economic woes of the farmers is the introduction of a simple yet effective technology on rain fed fields.

A sustainable land management applied with effective cropping scheme on rain fed areas in the province that will contribute to the socio-economic and ecological upliftment of the beneficiaries.

1. To gather data set that will reveal substantial information on the  stakeholders of the target Municipalities as to how they perceived  their agro ecological resources and how they maximize its utilization without prejudice to their environment;

2.  To characterize natural resource base and identify physical and socioeconomic constraints to agricultural production;

3.  To apply and enhance integrated cost-effective soil, water, and nutrient management practices based on the natural resource endowment of the farmer to address production constraints;

On soil, Climate, Crop, and Input

The team composed of Dr. Ernesto T. Miguel, Dr. Jovita E. Saguibo, Mrs. Irene Calsiyao and Mr. Loreto Juan representing different expertise.  Series of meetings among the team members had been conducted to identify priority objectives of the program and the roles of the members. The selection of priority site for the refinement of technology to be diffused was based from secondary data gathered from the different agencies of the province that supplied the necessary information needed by the team.

Likewise the barangay profile of an identified pilot area was taken for more serious analysis. A total household enumeration was made for the questionnaire distribution in Barangays Magao-gao and Baccong while in Baragay Macutay, random sampling was done; retrieval period took about a month for the three barangays..

Each of the team members conducted personal interview with identified respondents and key informants. The selection of respondents depended on the type of questions and topics of the interview.

Respondents included farmers who were asked about farm issues and concerns; the youth were also interviewed on production activities; barangay officials were questioned concerning developmental plans. Probing of responses for elaboration and clarification was extensively done.

A one-week immersion was made for each of the three Barangays by the researchers for community analysis imperative in determining the real problems, needs and potentials of the people. Taken altogether, the gathered responses would lead to the systematic planning-out of potential undertakings. This was made to determine  the level of consciousness of the people with regards to production constraints.

The intensive and probing interview with the clientele inspired the researchers as to what entry strategy should be done – but with the informed consent of the people. In short, they were given responsibility in pinpointing the technology that they choose to embrace irrespective of their experiences.

Prior to the conduct of  farm trials in the three Barangays, the group started with the school campus on-site demonstration for  the technology diffusion,  purposely to showcase simple yet very effective technology in  addressing the identified pressing production problem.

The choice was a farming system using the school’s agricultural wastes for soil improvement and water conservation.

Initial activity was the re-development of the unproductive areas between mango trees which was analyzed to have been nutrient deficient that had caused failure of agricultural researches of the College.

Chicken dung, substrates from the aged and thrown mushroom bags of the mushroom production were incorporated into the plowed soil on a different land preparation.  Rice straws from the school rice field was collected for mulch; the straws were aged and later became organic material.

The derived technology was demonstrated in Barangay Magao-gao of Pinukpuk, Barangay Macutay of Rizal, and Barangay Baccong of Tanudan, all in Kalinga Province. Qualified farmers from the three barangays were identified and chosen as the initial farmer cooperators after they were instructed to follow all the prescribed requirements. A personal observation of their attitude towards the improvement of their farming practices was done.

The three farmers   were given intensive personal lectures on the technology to be adopted and on the identified crops to be used in the demonstration farm based on the needs assessment of the locality.

Dissemination of technology developed was done through farmers’ training. Farmers were likewise invited for farm visitation. Home visitation for group and   individual lectures were done to gain rapport with farmers.