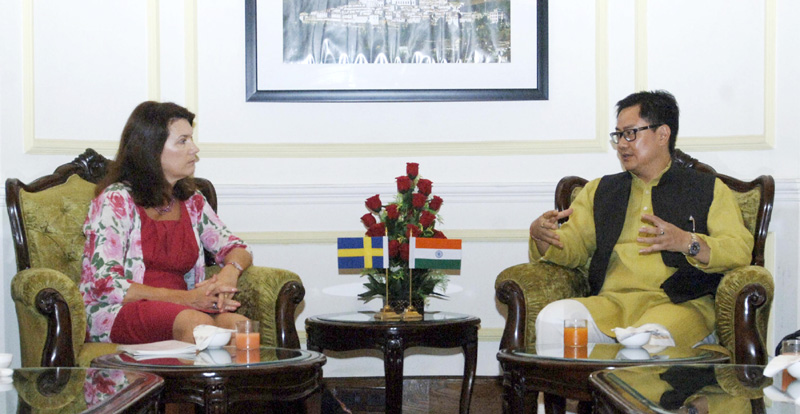 The State Secretary to the Ministry of Home Affairs of Sweden, Ms. Ann Linde meeting the Minister of State for Home Affairs, Mr. Kiren Rijiju, in New Delhi on October 06, 2015.

During the meeting both the Ministers discussed various issues of importance to the two countries including Disaster Management, threat of Islamic State of Iraq and the Levant (ISIL) and radicalization and steps being taken for counter-terrorism etc. While discussing about radicalization and threat of ISIL, Ms. Ann Linde observed that it is a big issue for Europe and urgent steps are being taken to protect the youth from lure of ISIL.

Mr. Kiren Rijiju apprised that steps have already been initiated in India to keep the activities of such groups under constant check and it is seen that parents of such misguided youth are also discouraging them from getting attracted to any such idea.

While discussing various other issues such as reliable Swedish technology, re-organization of Swedish Police Force, secure borders, the Ministers also shown concern over forced migration from Syria and emphasized the need for their rehabilitation.

Ms. Ann Linde was also informed about culture of unity in diversity in India. On the lines of Indo-German Security Cooperation, both the sides emphasized the need for security co-operation between the two countries and have shown their commitment to pursue the same.

The Ambassador of Sweden to India, Mr. Harald Sandberg and senior officers of the Ministry of Home Affairs were also present during the meeting.