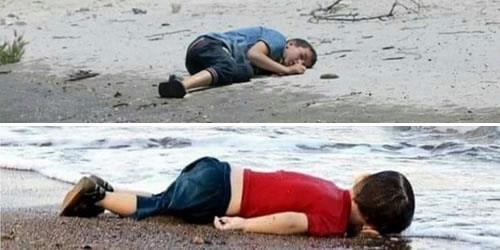 The image of a Syrian child killed this month by Bashar Assad warplanes in Aleppo, Syria, has once again stoked extreme anger in Syrian and international circles, and made many on social media furious. Aleppo activists say the boy shown in this image is Jamal al-Ashqar. He was picking berries from a tree nearby his school in Aleppo’s Saleheen neighborhood before being killed by lethal airstrikes launched by Assad bombers.

Images of other child were posted by Baha al-Halabi, an activist involved with the Aleppo Media Center. The image shows a small Syrian child lying dead on Aleppo’s cobblestone streets after 14 airstrikes by Assad’s military that left 19 killed and dozens of others wounded. They were all civilians.

Jamal in Aleppo after Ilan in Turkish waters

The image of Jamal al-Ashqar went viral, bringing back horrible memories of the innocent Ilan Kurdi, a Syrian child who died drowning during an unwanted journey. The image of this little boy, lying dead on the Turkish coastline of the Adriatic Sea, shocked the world over.

Bashar Assad has resumed his killing spree despite a “cessation of hostilities” agreement crafted by the United States and Russia in Syria. The U.S. and United Nations have turned their backs on these horrific crimes, prompting the Syrian opposition to suspend their participation in the Geneva peace negotiations.

In an attempt to salvage a collapsing pause in warfare, Stefan de Mistura, the U.N. Special Envoy to Syria, said the ceasefire in Syria faces grave danger. U.S. President Barack Obama has raised major concerns over the complete crumbling of the so-called truce. However, neither leaders go the distance to condemn Bashar Assad as the main element behind the status quo. Obama is even preventing any weapons aid to Syrian rebels to provide them the ability to defend themselves, where as Russia and Iran are sending vast amounts of weapons and ammunition to Assad’s killing machine. Iran, in addition to its Revolutionary Guards and militias recruited from Iraq, Afghanistan, Lebanon and Pakistan, is now deploying army units to take part in various battles across Syria.

The inaction seen from the United Nations and world powers, including the likes of United States with Obama adopting a “leading from behind” dogma, have led to the death of nearly half a million civilians, millions of Syrians being displaced and fleeing for their lives across the globe. We are also witnessing the daily killings and deaths of dozens, and at times hundreds of asylum seekers attempting to flee the hell-on-earth brought about by Bashar Assad, backed by the ruling mullahs of Iran.