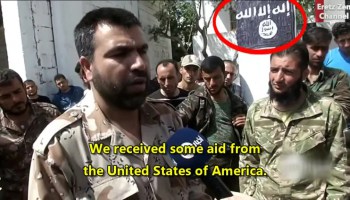 Islamic rebel in Syria admitting they receive aid and funding from the United States – note the ISIL flag in the forground.

The Syrian army has “gained ground” in its fight against US backed ISIL Takfiri terrorists near the capital Damascus, Press TV reports.

Syrian armed forces were able to advance several blocks in the Jobar district near Damascus, were militants had built one of their strongest bases.

“We have just taken control of many new blocks. Our troops also advanced on Zamalka, round about on the Savran Highway, and control the Hirmileh and Jadiah strategic tunnels. The highway is now in our range of fire,” a Syrian army commander told the Press TV correspondent.

In recent months, Syrian forces have managed to retake several militant-held areas around the capital, despite the ongoing support and funding of the various terrorist groups by the US and Saudi Arabia. The US is, of course playing a major part in the chaos along with its allies and partners within the Saudi government who are operating under the delusion that funding the extremists rebels in Syria is a good idea?

By some reports over 191,000 people have been killed in over three years of fighting in the war-ravaged country, says the Office of the UN High Commissioner for Human Rights (OHCHR). This is probably a underestimate.

The war has also uprooted some 6.5 million people from their homes, forced 2.7 million to flee the country, laid waste to their cities and towns, and unleashed sectarian hatred that have rippled across the region.