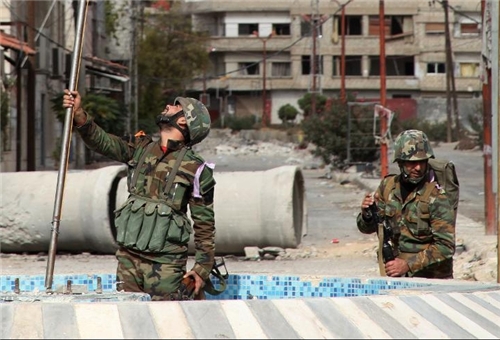 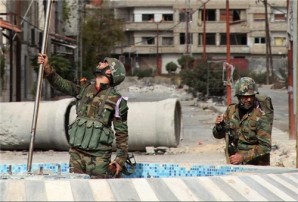 The Syrian Army continued military operations against US backed terrorist organizations on Friday, including against ISIL and is successfully repelling their attacks on military and civilian targets, across the country.

Reports suggest the Syrian military remains the most effective fighting force against ISIL and other insurgents on the ground in Syria.

What follows is a sector by sector report:

Syrian Army units continue to target US backed terrorists in al-Jafra and al-Mrei’iyeh in the countryside of the eastern province of Deir Ezzor, killing  many of them in droves.

Syrian Army units also reportedly destroyed terrorists’ hideouts and three vehicles equipped with heavy machineguns, and killed and injured a number of terrorists in the areas of al-Bouomar, al-Maryaiye, al-Rushdiye, and al-Sina’a in Deir Ezzor.

Elite units of the Syrian army destroyed several gatherings and hideouts for US backed terrorists in al-Qastal al-Tahtani, Aydoun, al-Latamina and Hamadi Omar in the countryside of the central province of Hama.

Syrian Army units also destroyed an armored vehicle and three vehicles equipped with heavy machine guns, and killed a number of terrorists in Hamadi Omar. Commanders on the ground noted many US weapons and NATO Ammunition boxes.

Elite units of the Syrian army and armed forces killed terrorists and destroyed some of their vehicles in Qalamoun area in Damascus Countryside.

Note: An exact number was not given

The Syrian army clashed with terrorists in a number of areas in Daraa countryside, killing and injuring large numbers of them and establishing control over areas north of Miskeen city.

A military source said that “the Syrian army unit killed and injured all members of a terrorist group west of Atman in Daraa countryside”, adding “that other army units established control over areas north of al-Sheikh Miskeen after eliminating large numbers of terrorists and destroying their vehicles.”

The source added that “an army unit eliminated all members of an armed terrorist group that was trying to infiltrate the road linking Sweida and Nasibin border crossing with Jordan.”

A Unit of Army and Armed Forces killed several terrorists and destroyed their equipment in Um Sharshoh, killing a number of terrorists.

Another Army unit “eliminated many terrorists and destroyed a weapons and ammo cache in al-Hilalia Farm 18km northwest of Homs city.”

Units of both the Syrian Army and Armed Forces inflicted heavy losses on US supported ISIL terrorists in Jazal and the area surrounding al-Sha’er Field in the eastern countryside of Homs.

In al-Shandakhania al-Janobia and Jub al-Jarah, many terrorists were killed and others injured and their weaponry and ammo destroyed, a military source said.

SANA reporter in Hasaka said an army unit crushed a den belonging to the Islamic State of Iraq and Syria (ISIS) along with the terrorists inside it in Tal Brak in the northern countryside of the northeastern province.

Units of the army and armed forces thwarted at dawn terrorist attacks launched against military posts in Jabal al-Arbaeen area in the countryside of the northern province of Idleb.

A military source confirmed that the army units repelled the attackers, killing large numbers of them and leaving others wounded.

Three vehicles equipped with heavy machine guns, an armored vehicle and a bulldozer which the terrorists used in their attack were destroyed.

Other army units foiled attempts by members of terrorist organizations to infiltrate Ariha city in the countryside that coincided with exploding a tunnel near a military post which had earlier been emptied by the armed forces in al-Qasr al-Saudi site in Jabal al-Arbaeen, leaving tens of terrorists dead and others wounded.

Many terrorists were killed in Kafr Lata on the southeastern outskirts of Jabal al-Arbaeen Mountain.

The source confirmed the death of many terrorists and the destruction of their weaponry and vehicles north of Jisr al-Shugour and south of Ariha which was targeted by terrorist mortars that caused civilian injuries.

Another Army units destroyed many hideouts and dens for terrorists in Hazazin and al-Habeit in Ma’aret al-Numan area.

A military source told SANA that the army eliminated a large number of terrorists and destroyed caches containing rockets and mortar shells and vehicles equipped with heavy machine guns in Marj Shili, Ghmam and Kitf al-Rumman.

The source added that the army also destroyed vehicles equipped with heavy machineguns in the areas of al-Sukariyeh, Rabi’a and Kensabba in the province’s northern countryside.

Filed under: Military, News
Share Tweet Pin G Plus Email
previous article: U.S. Army refuses to suspend or debar supporters of the insurgency in Afghanistan from receiving billions in government contracts
next article: H.R. 159 does not adequatly address the issue of children trafficking other children in sex