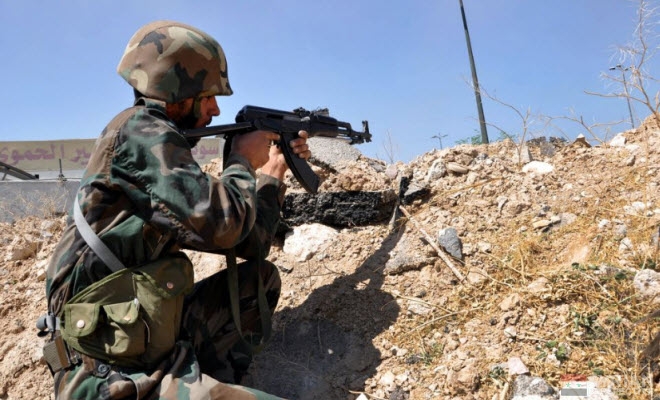 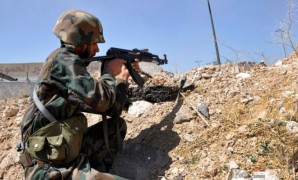 Syrian army soldier advances on terrorist targets near Damascus. Note the uniform and Kevlar helmet – provided by the US back  in the 1990’s when Syria was still considered a close ally of the United States.

The Syrian General High Command of both the Army and Armed Forces said that army units (in cooperation with the Popular Defense Forces), have established full control over Adra al-Balad and Adra al-Jadida cities in Damascus countryside after successfully uprooting elements of the notorious ISIS group,  al-Nursa – an al-Qaeda affiliate.

The Command said in a statement that the new military achievement came in the “wake of regaining control of Adra Workers’ City and the group of factories and industrial facilities and the surrounding farms”, which had been for months terrorized by roving bands of terrorists, including those being directly funded and supported by the United States of America with covert military aid ( Free Syrian Army).

The statement delivered to select news organizations, across the world said the army units have “destroyed a wide network of tunnels and killed large numbers of terrorists who committed grisly  crimes against peaceful civilians and used the area as a springboard for their attacks. There were also reports of “rape rooms” and women and children being held hostage.

The Syrian army’s elite engineering units were reported busy dismantling explosive charges and mines  and booby traps while army units continue to carry out what was described as ” mopping-up operations” against “residual terrorist groups in the area”, according to the statement.

The military victory is particularly important according to one source given the “strategic geographical location of the area at the capital’s entrance overlooking the international highway that links the central and southern regions.”

The area has been used as a conduit for US backed terrorist groups and foreign fighters who come to Ghouta to mount their criminal attacks and commit atrocities.

The army command concluded the statement by” reaffirming its renewed commitment  to uproot takfiri terrorists and restore security and stability to all areas across the country.”

We tried unsuccessfully to reach out to sources within the Syrian army via social media sites which is on edge because of US Air strikes already which they fear could begin target innocent civilians.