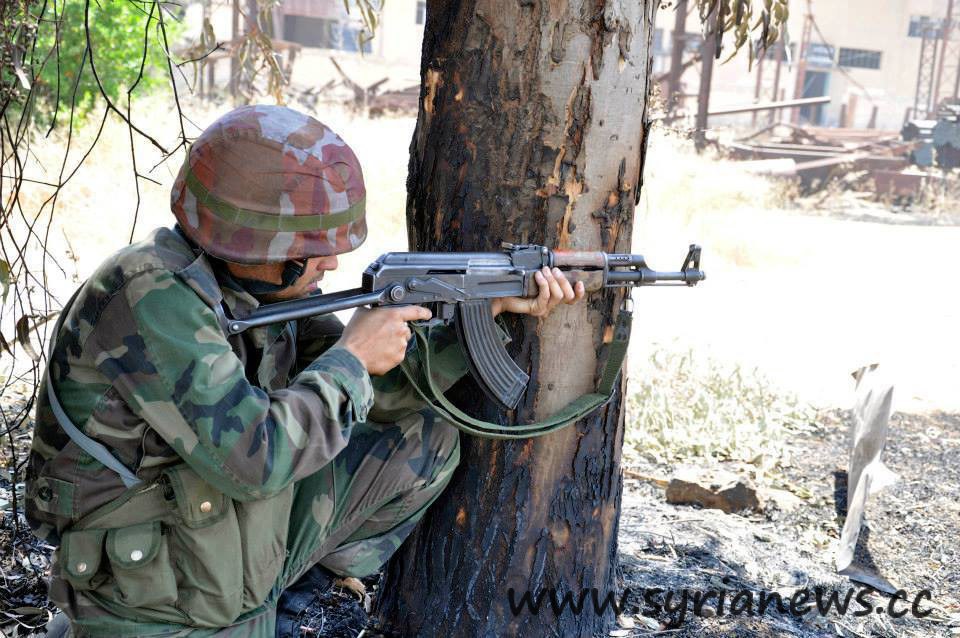 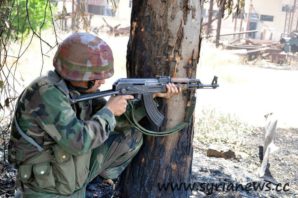 A  Syrian Army soldier takes a position near a suspected terrorist stronghold in Aleppo.

The Syrian army is one of the best trained,best equipped,  most disciplined fighting forces in the entire world. They proved it again over the weekend by killing scores of terrorists.

Multiple sources are reporting that the Syrian army had killed at least 50 Al-Qaeda-linked terrorists in Daraa countryside in Southern Syria.

The Syrian army units also made advances in the town of Arabeen in Eastern Ghouta, killing at least 35 terrorists in fierce clashes…

The Syrian army is also reported to have “ambushed” a gathering for Al-Nusra front terrorists in Daraa city killing over 50 militants. Many were later identified as foreign fighters.

Speculation concerns at least one white Caucasian male who was shot multiple time before when Syrian army soldiers burst in on him and other terrorists plotting attacks. It is unclear if he was an American terrorist or spy. His pocket litter is said to have included a rare “1912 American silver Peace dollar and Swiss Army pen knife.”

They also freed a young Syrian girl who was strapped naked on a table and repeatedly raped.

She is reported to have undergone medial treatment and is safe at a nearby Army mobile station hospital receiving care and counseling for rape and trauma related injuries inflicted by the terrorists. Her condition is being reported as stable. She was however severely dehydrated.

In another report over 40 Syrian Army commandos attacked a strongholds in al-Jubailiyeh area and cement factory in Aleppo. Killing ISIS and al-Qaeda fighters.

Other terrorists ” fled the battlefronts leaving their weapons behind, including M-16 rifles that intelligence officials indicate may have belonged to the American Army in Iraq.”

“We are turning the tide on the rebel units and the foreign fighters operating in our areas”, said one Syrian commander, who wished to remain anonymous.

He added: “What we are finding in their stead evidence of mass torture, and executions of civilians. We also discovered ammo boxes with NATO marking on them, indicating the support of the Americans and their NATO allies. In addition we have discovered radios marked Motorola (a manufacturer in America) that indicates the rebels are receiving outside support from America as well.”

Syrian Armed Forces also are said to have inflicted “massive losses” upon insurgents in Idlib and Damascus countryside with dozens reported killed.

We also received one report on Sunday night that “180 gunmen in Bassima in Damascus countryside turned in themselves and their weapons to authorities.”

See videos pertaining to US policy to fund and arm terrorist in Syria in blatant violation of international law: