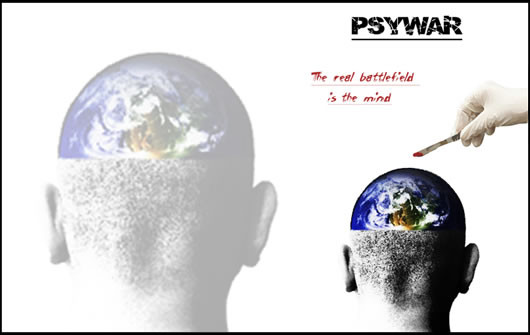 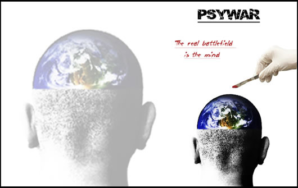 Psy-War – the battlefield of the mind.

In 2012 we reported on an unusual incident where Syrian military officials sent tens of thousands of text messages over cell phones nationwide with a message aimed at the rebels and terrorists fighting President Bashar Assad’s regime: “Game over.”

Many people report both surprise and a sense of foreboding over the text messages on their cellphones. With some people fearing that the government is monitoring people’s cell phone communications.

The messages signed by the Syrian Arab Army urged the rebels to immediately surrender their weapons and warned the countdown to evict foreign fighters has begun.

The texts appear to be part of a “Psy- Ops” or psychological warfare directed at the US backed rebels.

Psychological warfare (PSYWAR), or the basic aspects of modern psychological operations (PSYOP), have been known by many other names or terms, including Psy Ops, Political Warfare, “Hearts and Minds”, and Propaganda (see article: Psychological Operations: The Need to Understand the Psychological Plane of Warfare http://www.journal.forces.gc.ca/vo9/no1/05-clow-eng.asp ).

Various techniques are used in Psychological warfare , by any set of groups, and aimed to influence a target audience’s value systems, belief systems, emotions, motives, reasoning, or behavior. It is used to induce confessions or reinforce attitudes and behaviors favorable to the originator’s objectives, and are sometimes combined with black operations or false flag tactics. Target audiences can be governments, organizations, groups, and individuals.
See video: Introduction to Psychological Warfare http://www.youtube.com/watch?v=j2JhdswkO6o

“Syrians say they began receiving the messages a day after rebels bombed a military command center in Damascus — a major security breach of the heavily guarded capital that highlighted the regime’s growing vulnerability in the face of a rebellion growing in confidence and capabilities. People with cellular subscriptions received the messages while those with prepaid phones did not, residents in the Syrian capital said”, according to a report by the Associated Press (see article: Syrian military sends text messages telling rebels: “Game over.” http://www.startribune.com/world/171542691.html?refer=y