UNITED NATIONS (TRNS) – Chemical stockpiles found earlier this week in a Syrian rebel stronghold of Baniyas were not suited for chemical warfare, despite forceful allegations made of their danger by representatives of President Bashar al-Assad’s regime and Syrian state media.

The 281 barrels of chemicals seized—described on Monday as “hazardous” and “capable of destroying a whole city, if not a whole country” by Syria’s Permanent Representative to the United Nations—are commonly used in the production of bubble bath, textiles, and medicine, according to chemical weapons experts and scientists.

Allegations of foul play came at the time when the world’s eye is fixed on the potential use of chemical weapons in the Syrian civil war. Western nations including the United States, the United Kingdom, and France have threatened to intervene in the conflict if definitive proof of chemical weaponry is unearthed.

The two-year conflict has claimed an estimated 100,000 lives.

But experts doubt if the five substances discovered in Baniyas were fodder for chemical weaponry. 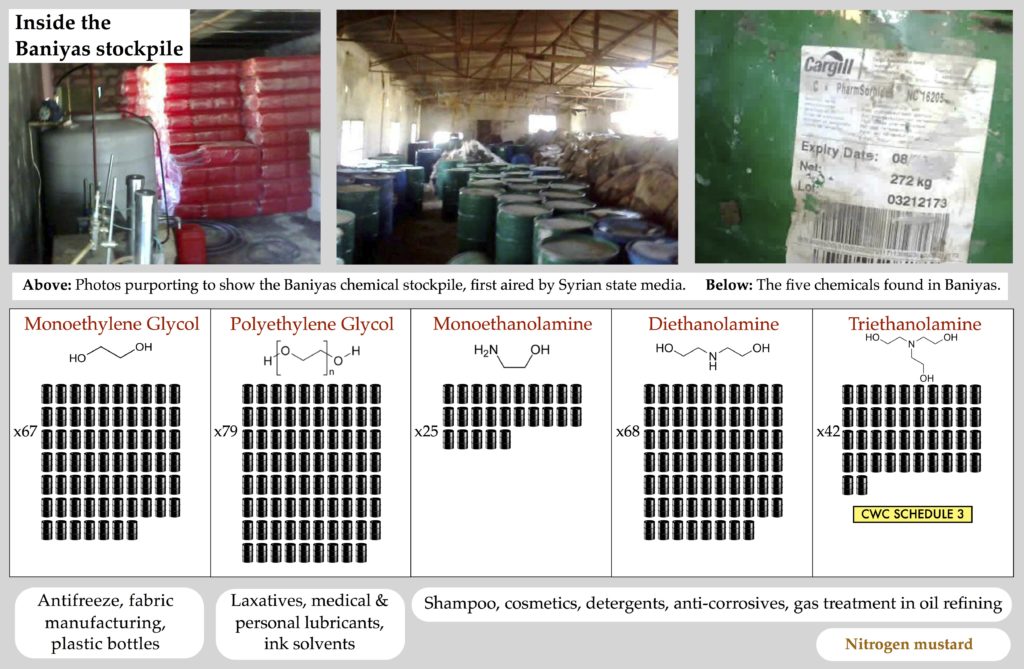 Philip Coyle, Senior Science Fellow at the Center for Arms Control and Nonproliferation, said the chemicals cited by Ja’afari are common in numerous industrial operations.

“They are used for all kinds of ordinary purposes,” Coyle said. “Everything from shampoos and bubble bath, to antifreeze or making fabric, lubricants or laxatives.”

The substances in question are not the stuff of black market weapons, but are manufactured in vast quantities for worldwide distribution, Coyle said. That claim could explain why a label of American commodities manufacturer Cargill is visible on a green barrel seen in photographs circulated by Syrian media that purport to show the Baniyas stockpile.

Only one of the five chemicals in question—triethanolamine—is regulated by the international Chemical Weapons Convention, and it is classified as a Schedule 3 substance, the lowest classification utilized under the Convention. Schedule 3 is a tier primarily reserved for chemicals with wide industrial use.

Triethanolamine is a potential chemical precursor in the creation of nitrogen mustard, a chemical weapon stockpiled in the early 1900’s, but which never saw deployment in warfare. Nitrogen mustard and its derivatives have more recently been studied for their medicinal effects in treating a range of conditions such as brain tumors and non-Hodgkins lymphomas.

American firms in possession of triethanolamine are required to declare their holdings to the Department of Homeland Security, but the substance can still be acquired with relative ease, particularly by established laboratories.

The presence of the chemical at an ocean-side town was not altogether surprising, despite its regulated status, Coyle said.

“[Triethanolamine] is used in gas treatment and at oil fields,” Coyle said. “So it’s not unusual that you’d see this kind of a chemical, especially in a port city. This is not a city that’s just no place, it’s an active port city.”

“I think that the captured chemicals are useful for the chemical industry, but not for [chemical weapons] purposes,” said Raymond Zilinskas, director of the Chemical and Biological Weapons Nonproliferation Program at the Monterey Institute of International Studies at Middlebury College.

Zilinskas shrugged off suggestion that the two glycol substances cited by Ja’afari could have served as precursor chemicals for a more toxic substance, such as the powerful but temperamental explosive, nitroglycerin.

“For one thing, nitroglycerin is really difficult and nasty stuff to work with, and it’s going to go off almost by itself,” Zilinskas said. “If you’re a terrorist, you can get TNT all over the place. Why would you need nitroglycerin?”

While each chemical named in the Baniyas stockpile could be described as mildly toxic, Coye described the primary risk posed by the five substances as that of fire or accidental ingestion.

“[Monoethylene glycol] is sweet-tasting, and so, even though it’s not used as a chemical warfare agent, people worry about a chemical like that being attractive to children,” Coyle said.

As for the other four substances, Coyle dismissed the possibility of any such accidental consumption.

“If you were in any position to ingest any as a poison, you would stop right away because of the bad taste.”

Nestled along Syria’s Mediterranean coast, Baniyas has been the scene of intense fighting throughout the two-year Syrian conflict. In May, a raid carried out by troops loyal to President Bashar al-Assad killed more than 200 in the town.

Given that rebels in Baniyas have been under siege since, rebel elements could have come into possession of the chemical stockpile by accident, Coyle said.

“They may have retreated to an area where they stumbled across these chemicals and may not have known what good they were,” Coyle said. “There’s way too many here to take with you, but I think they might just have stumbled upon them in the course of fighting.”

Ja’afari’s pronouncement could owe itself to divided messaging within the Assad government as it struggles to reassert control over the divided country, Zilinskas said.

“[Ja’afari] was probably informed about these chemicals, and he was probably making the worst assessment possible,” Zilinskas said. “The scenario probably is that the Syrian government ordered these chemicals legally, they were shipped to the port. With the war going on and the port captured by insurgents, the chemicals were just sitting there.”

The Syrian Mission to the United Nations did not respond to requests to comment on the Baniyas stockpile.