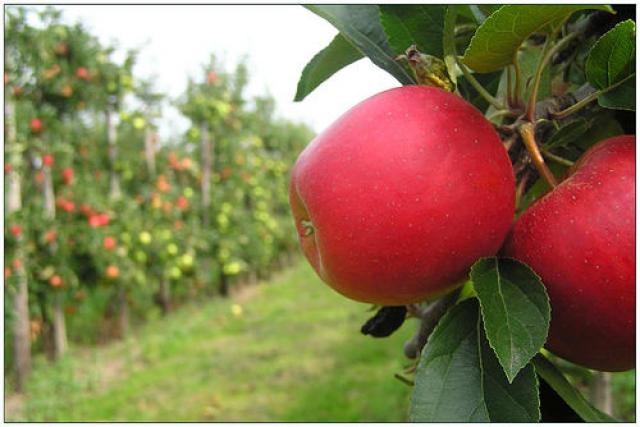 When Hala al-Safadi bit into the apple, she felt as though she had been instantly transported back to her home town, which she left for good nine years ago.

“They must be from our farm there or from a nearby farm. I can smell my childhood in them,” she said.

She was referring to a batch of fruit recently imported from the Golan Heights, a disputed stretch of land which has been occupied by Israel since it was captured from Syria during the Six-Day War in 1967.

Although Safadi, a 37-year-old Syrian Druze, was born and raised in the Golan Heights, once she chose to leave the region to marry a Syrian national, she gave up her right to return to her homeland even for a visit.

“My two sisters got married but I didn’t attend their weddings,” said Safadi, tearfully, adding that she missed out on many other important family events.

She was even prevented from attending her mother’s funeral.

Former Golan Heights residents like Safadi who decide to move to Syria are barred by the Israeli authorities from returning to their home. The zone surrounding the Israeli-occupied territory is a mined no-man’s land, delimitated by barbed wire and guarded by United Nations troops.

To see her family, Safadi goes once a year to a hill outside the town of Majdal Shams, which lies in the northern part of the Golan Heights, and speaks to her relatives there through loudspeakers.

Many other families separated by the border communicate via the internet or organise meetings in a third country, mainly Jordan.

However, recent signs that peace talks between Tel Aviv and Damascus could take place have given the inhabitants of the Golan Heights hope that economic and social contact with Syria might be allowed in the near future.

Syrian president Bashar al-Assad has said that his country would hold peace talks with Israel – with whom Syria technically remains at war – if the United States acted as a mediator.

The strategically important Golan Heights remains a bone of contention between the two parties, with Syrians insisting on its return as a condition of peace and Israeli leaders reluctant to concede the territory.

As an ongoing drought in Syria harms food production, Syrians regard the Golan Heights, with its significant water resources, as being of great economic importance.

Nevertheless, the export of eight tonnes of apples, grown by Syrian Druze farmers in the Golan Heights, into Syria last month was seen as a signal that tensions may be easing between Israel and Syria. This was the fourth time that the Israeli government has granted permission for apples to be exported from the territory into Syria.

Locals welcomed the recent delivery of the fruit.

“The arrival of the apples, produced and nurtured by our people in the Golan Heights, is a sign of unity between the people of one home land,” said Muhammed al-Afish, an official in the Syrian city of Quneitra, which lies next to the Golan Heights.

Salim Brick, a professor of Israeli politics at Haifa University, said that this sort of development could help loosen tensions between the countries, as well as improve Israel’s image in Syria.

Brick told Middle East Online earlier this month that the Druze – a religious community found mainly in Syria, Lebanon, Jordan and Israel – could help foster links between the neighbouring countries.

According to Israeli government statistics, around half of the 40,000 people living in the Golan Heights are Syrian Druze. Unlike those residing in the rest of Israel, most Druze in the occupied land – which stretches over a surface of about 2,000 square kilometres – hold Syrian citizenship.

Following the recent exports of apples into Syria, Druze farmers in the Golan Heights said that they greatly benefit from exporting their products into the country, according to an article published last month in the UK-based Economist magazine.

They explained that it was difficult for them to compete in Israeli markets, as Jewish settlers who work in farming in the Golan Heights receive more generous subsidies from the government, said the article.

Other restrictions also face the Druze living in the region. While they are granted a laissez-passer (travel document) as permanent residents of Israel, only some religious clerics and university students are granted temporary permission to leave to enter Syria.

According to some unofficial estimates, there are few hundred students from the Golan Heights studying in Syria.

Samih Abbas Abu Awad, 25, who studies dentistry at the University of Damascus, said that young people from the Golan Heights preferred to study in Syria because university tuition fees in Israel are exorbitant.

Damascus supports those Golan Heights students at Syrian universities by providing free education and housing, and a monthly stipend of 100 US dollars.

“The few who can [afford to] join Israeli universities suffer from discrimination when it comes to housing allowances and conditions [required] for passing exams,” said Abu Awad, adding that many colleges do not allow students from the Golan Heights to specialise in pharmacy, medicine or dentistry.

Amin Salih, a 20 year-old pharmacy student, said that students from the Golan Heights who are enrolled in Syrian universities, are only allowed by the Israeli authorities to return once a year during the summer holidays.

“Three months ago, my father passed away and I was not allowed to attend his funeral. That hurt me a lot,” he said.

Students from the Golan Heights need a security pass from the Israeli government to go to Syria.

“It is difficult to obtain the permit,” said Radwan Abu Saleh, a 27 year-old Syrian from the region, studying dentistry at the University of Damascus.

“Israeli authorities can prevent us from leaving if we participate in demonstrations or strikes or any other act that they deem as a threat to the security of Israel,” he said.

Yet many are hopeful that these kinds of restrictions might soon be relaxed.

“I hope we will be able to return home or at least just visit,” said Safadi, with tears in her eyes, after another bite of the apple from her home land.