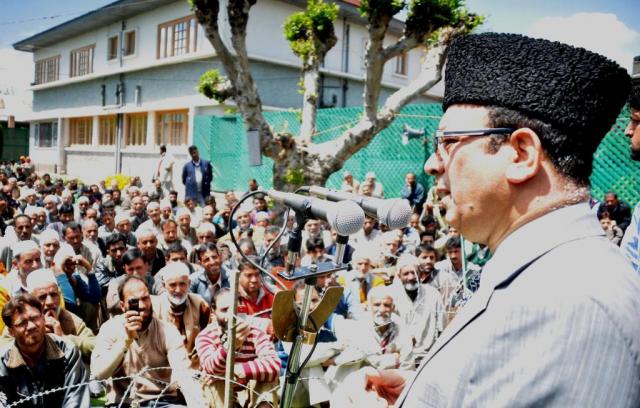 Srinagar,April 21 (Scoop News) –     Asserting that all possible resources are being mobilized to provide improved services to the general masses, the Minister for Finance and Ladakh Affairs,  A.R. Rather today vowed to uphold the trust and confidence of the people reposed in the coalition Government led by Chief Minister,  Omar Abdullah. It is endeavour of the Government to come upto the expectations of the people, he added.

Addressing a public gathering at Tulsi Bagh, Srinagar,  Rather said giving every citizen a say and voice in the State’s Governance was the primary objective of the Government adding that empowerment of people by strengthening the basic units of democracy is a landmark initiative taken by the Government in this regard. He said Public Services Guarantee Act (PSGA) passed by the State legislature is a historic decision of the Government to ensure time bound delivery of services to the people, adding that the Act has made concerned officers accountable to provide required services to the people in a fixed time frame, failing which concerned officers will be liable to imposition of fine besides disciplinary action under rules. “Forty services of 6 major departments including Power, CA&PD, Housing and Urban Development, Revenue, PHE and Transport have been brought under the ambit of the Act,  Rather added.

“The Act is a bold initiative towards making administration responsive and accountable and eradicates corruption”.  Rather said adding that Right to Information (RTI) Act is another landmark public initiative which guarantees quick response to the grievances of the people. He said some more vital services including issuance of character verification certificate by Police department are also being brought under PSGA shortly to provide relief and convenience to the people. “In fact the Act symbolizes the transition from public administration to public service, which will bring transparency and accountability in the administration”,  Rather said.

The Finance Minister said the massive developmental schemes underway in nook and corner of the State has steered the State towards a major socio-economic revolution. “These people friendly measures have raised the popularity graph of National Conference among the people which has unnerved the opposition”,  Rather said. He cautioned the people about the disinformation campaign of the opposition and asked them to supplement Government efforts by monitoring execution of works in their respective areas to ensure judicious use of funds and quality of building material.

Saying that the unemployment problem is the biggest challenge which cannot be overlooked,  Rather said Government is keen to remove the feeling of despair among the unemployed youth. He said despite limited resources, the present Government has recruited about 40,000 educated youth in a transparent manner through different recruitment agencies adding that exploration of more job opportunities for the unemployed educated youth would continue in future also. However, he asked the youth to venture in self employment schemes for earning a dignified livelihood adding the J&K EDI has been established to provide free basic training and guidance to the entrepreneurs for establishing their income generating units besides providing 30 percent of the total cost of the unit as seed capital fund which shall be free and non-refundable. “An MoU has been signed with J&K Bank to ensure lending facility for the entrepreneurs sponsored by EDI within two months”, the Finance added.