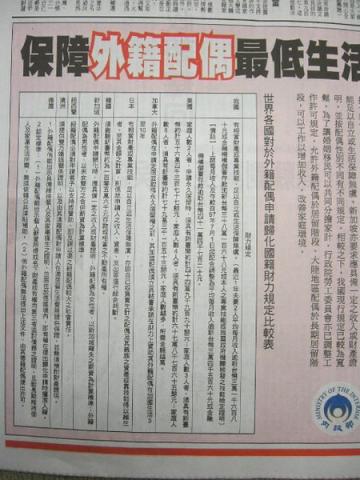 On Taiwan’s TV screens there is a commercial about drawing lots of cars. In this commercial, a woman with south-east Asia look is driving a car, and the subtitle says:”How can she own a car?”

Is this a question? How cannot a south-east Asia woman own a car in Taiwan? When you see more and more women with south east Asia look playing roles of servants in each commercial or advertisement on cleansers and brooms, the question seems quite easy to answer. Their roles that Taiwanese media represents are always servants and poor people–even though there are at least 200 thousand south east Asia women bearing the identities as spouses or mothers of Taiwanese people.

Business commercials produced by private sectors discriminates against them, while the government-made advertisements are full of repression. Since the law stipulate foreign spouses to provide proof of super high financial capability if they want to obtain permanent citizenship in Taiwan. Last year, spouses from South East Asia countries and Mainland China composed the Coalition Against Financial Requirement for Immigrants. The Alliance protested the commercials carried out by Ministry of the Interior distorted the facts and repressed their struggles for basic human rights.

"In essence, with a little bit of logic you will see that there is no meaningful connection between “financial threshold to naturalization” and “ensuring lowest basic living conditions for foreign spouses”. If there is any immigrant’s family falling below basic criteria of survival, that should be the problem of social welfare and discrimination prevention–nothing to do with financial threshold."

"According to these sayings, we should carry out census on financial capability every a few years and suspend ID cards of those who don’t pass the threshold, shouldn’t we?"

Things like this never happen just once. The advertisements carried out by Taiwanese Government not only repress foreign spouses but also Taiwan aborigines. In the end of last year, the government of Taipei County wanted to force a group of aborigines to move away who had lived by the Hsin Dian River for generations (see GV’s report here). The government claimed that the high land is vulnerable to floods and published a advertisement with a big title saying “don’t regret after your village is under water!”

Even though their are numerous discrimination commercials and ads in Taiwan, there isn’t much reflection among public opinions. Very often, only the minorities who are directly affected by the ads would come out to protest. Among alternative media, Taiwan Lihpao and BaoBonPhuong monthly, a newspaper for Vietnamese migrant, have made a public statement for boycotting discriminative ads.

"Since it is crucial for us to understand social minorities and improve media standard, Chang Zhen, the chief editor of BaoBonPhuong monthly – a newspapers for new immigrants, stated sincerely that: “as a media serving new immigrant and concerning about migrant workers’ rights, even though we still rely on subsidy for our publication work and our finance is tide, BaoBonPhuong monthly won’t accept any advertisements that are discriminative towards migrants, homosexuals or indigeneous people.”"

However, POTS, a most well-known and widely circulated alternative printed media seems to be indifferent to the discriminative advertisement issue. Last year, the magazine has an anti-homosexual film advertisement. Many readers are astonished by the ad as POTS likes to translate left wing media articles, such as Guardian and it is widely believed that the magazine has a leftist orientation. Homosexual groups protested against the ads, but according to a report by Lihpao, POTS’ editor in chief Huang Sun-Quan tried to explain off the issue by “different standard between advertisement and news content”, “business need” and “different management principle between media and social movement group”, etc.

Another serious example happened right before the voting day of Presidential Election which just finished 3 days ago, when the campaign of DPP’s candidate, Frank Chang-ting Hsieh, published several newspaper advertisements on March 20 in order to fight against the “cross-strait common market” political idea brought out of Ma Ying-jeou, the candidate of KMT. One of the advertisement from DPP enraged many bloggers.

In the advertisement it says:

"Ma Ying-jeou advocates one Chinese common market, which allows free flow of people and goods. A huge amount of mainland Chinese, with very different lifestyle would flow into Taiwan. These people are noisy, they would jump the queue, compete for seat in the buses, split and shit in the street. And this would become part of our daily life, just imagine how it would affect our living? Taiwanese, are you ready for this?"

When all these discriminative advertisements are popping up, there are more and more inappropriate act against minorities in Taiwan society. Homosexuals are subjected to violent threat and attack; government officials are speaking in discriminative language; middle school youths and university students have fun by bullying migrant workers; teachers carry out physical punishment on aboriginal kids. From time to time, there are news about physical abuse towards Southeast Asia workers and wives by employers and husbands respectively. Apart from violent incidents, family conflicts occur quite frequently. Putting aside issue concerning the coming out of homosexuals, there are cases when children cannot accept their Vietnamese mother, or even verbally abuse their mother. A Vietnamese wife wrote to sisterhood.org and said that:

"I want to divorce!… I want to go back to Vietnam! His two kids look down on me, I am Vietnamese, so what?… I am their father’s wife… I am their stepmother!"

In order to improve the deteriorating media ethics in term of discrimination, the National Communications Commission (NCC), when drafting the “Telecommunications Act” in last September, explicitly wrote down that television broadcast is “prohibited to instigate ethnic hatred or gender discrimination”. Offender would be subjected to 30 thousand to 1 million fine.

However, communication study professor Benla Kuang pointed out that:

"Hateful and discriminative language shouldn’t restrict by the traditional definition of “ethnic group”, in France, the “Freedom of Press Act” includes “ethnicity, nationality, religion, gender, sexual orientation, disability” as areas for prohibition against discrimination. Some countries’ anti-hate act has extended to migrant, age-group, occupation, language, people’s outlook, etc. The areas covered by the (Taiwan) Telecommunications Act draft is much narrower."

At present, the Telecommunications Act hasn’t been passed in the Legislative Yuan, the anti-discrimination regulation hasn’t been enacted. Even if the Act has been passed, it won’t be easily to carry out. Such kind of discriminative advertisement would still appear as the media lack self-regulating practice and regulative law isn’t ready yet.

(Original written in Chinese by Honkwun, Translated into English by Portnoy and Oiwan)